Though you can record footage on PlayStation and Xbox, you’ll still want a capture card if you plan on streaming gameplay on Twitch, YouTube, or another platform. Even if you’re just recording clips to use in videos or just to have for yourself, a capture device is the way to go. Capture cards give you far more control over your footage and remove limitations for the amount of gameplay you can capture. A dedicated capture card lets you connect your console to your PC to save and edit your recordings/streams with ease. Thankfully, there are plenty of reasonably priced external capture devices out there, whether you are gaming on PS5, Xbox Series X, or Switch. And if you’re a PC gamer, an internal capture card is your best bet and provides unbeatable quality. So, what is the best capture card in 2022? We’ve rounded up a list of our picks.

As we try out more capture cards, we’ll be sure to update this list with any we find exceptional. In the meantime, be sure to check out the best capture cards we’ve already tested and vouch for below. 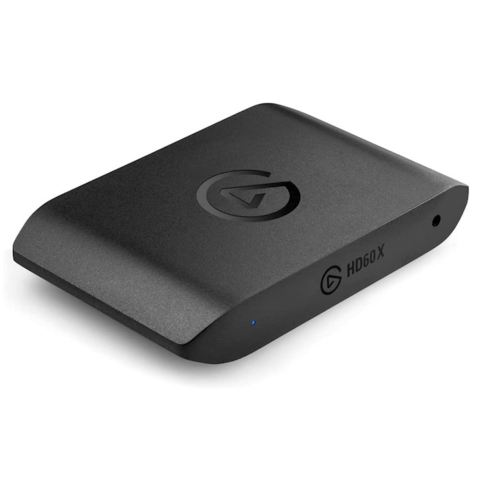 Elgato’s HD60 X offers the best combination of performance and price, which gives it the edge on this list. The HD60 X is essentially a follow-up to the HD60 S+, a capture card that was on this list until we tested the HD60 X. The HD60 X is a sleek and compact external capture card that can capture video in 4K resolution at 30fps. If you want a faster frame rate in your recordings, you can also choose to record in 1080p at 60fps.

One of the best features on the HD60 X is that it has stellar passthrough specs, so you don’t have to compromise your personal gaming experience on PS5, Xbox Series X, or PC while streaming or recording. It supports passthrough at the following settings: 4K at 60fps, 1440p at 120fps, and 1080p at 240fps.

You can use Elgato’s proprietary game capture software or any third-party program such as OBS, Steamlabs, or Vmix to record and manage your clips. Setting it up is as simple as plugging it in to your PC or Mac via the included USB-C cable and connecting HDMI cords to your display and console/PC. 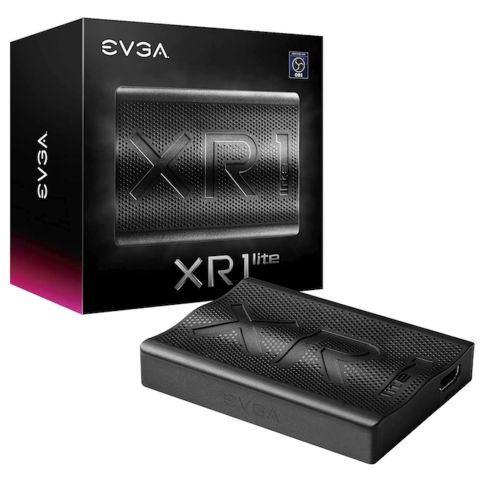 The EVGA XR1 Lite offers solid streaming and recording quality for the price. It’s capable of recording at 1080p at 60fps and has 4K passthrough, so you can still play your games in 4K while streaming at the lower resolution. The XR1 Lite is certified for OBS and connects via USB 3.0 Type-C. It’s compatible with all modern game consoles as well as PC.

If you’re willing to spend around 100 bucks, you can grab the EVGA XR1 Pro, which is capable of streaming at 1440p at 60fps or 4K at 30fps. The XR1 Pro also has an audio mixer, so you can tinker with your sound on the fly. And if you’re someone who likes RGB lighting, the EVGA XR1 has customizable lighting effects. 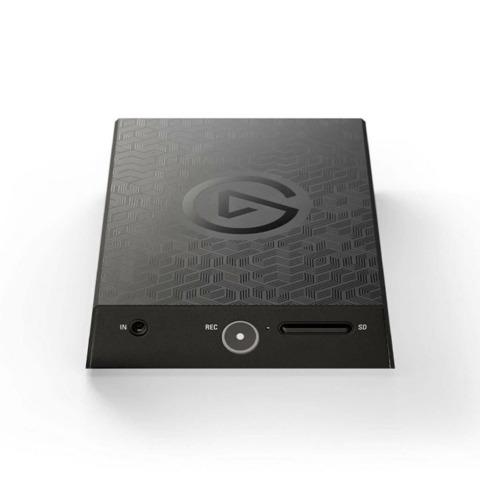 Elgato’s new 4K60 S+ is the most exciting capture card on this list, thanks to its onboard video encoder and the ability to capture footage directly to an SD card. All you have to do is plug in your console via HDMI, press the capacitive touch button, and you’re recording–no PC needed. And considering its portable form factor, the Elgato 4K60 S+ makes for a great option when going to events like PAX, where you might be able to capture game footage of games before they release. It features 4K HDR and 60 frames per second passthrough (with the right HDMI cable), as well as no noticeable lag, making it something you can leave plugged in at all times. Unfortunately, unlike Elgato’s internal 4K60 Pro card, it does not support passthrough for 1080p and 240Hz or 1440p and 144Hz.

The price can also be unearthed for casual content creators. There’s no doubt that the portability, SD card recording, and video-encoding capabilities are attractive features for game capture, but they come at a price–one that’s actually quite high. If you don’t absolutely need everything the 4K60 S+ has to offer, then you may not want to shell out the extra cash required to pick this high-end external capture card up. 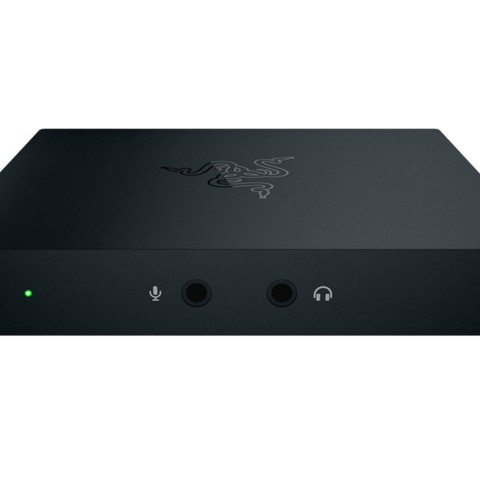 Razer, known for its excellent gaming keyboards and mice, also makes a great game capture card. Slick and discreet, the Ripsaw HD easy to place anywhere on your desk and keep a low profile, while capturing up to 1080p and 60 FPS with passthrough for 4K and 60 FPS. It unfortunately does not support HDR passthrough. This capture device’s unique feature allows you to plug in a 3.5mm microphone and headphones to record your voice and monitor your audio respectively–this is perfect if you plan on streaming with a gaming headset. For the budget-minded gamer, this, along with decent streaming software, is all you need to start streaming your game footage and build your Twitch channel. 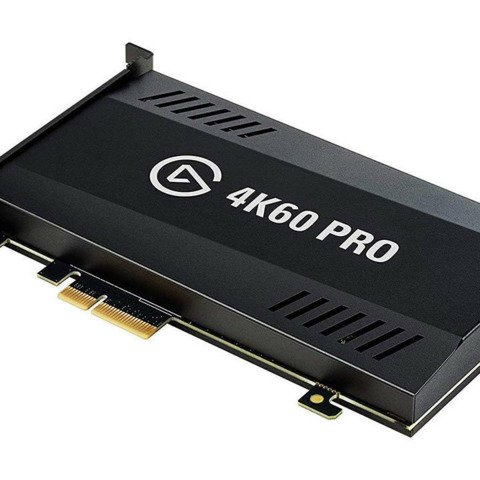 The Elgato 4K60 Pro is the best internal PCIe capture card out there. It’s capable of capturing gameplay up to 4K and 60 frames per second directly from your gaming PC, and it’s easy to set up, too: All you have to do is plug it into your motherboard and download the drivers to get it working–no USB cable required. It can capture HDR and passthrough up to 1080p at 240Hz and 1440p at 144Hz. These passthrough capabilities are particularly useful if you’re going to use this card to capture your own PC’s gameplay, as you won’t have to sacrifice your own experience while recording or streaming. It also works seamlessly with the PS4, Xbox One, and Nintendo Switch. With some third-party accessories, I was even able to capture retro platforms like the Nintendo GameCube and Wii without the need for an external capture box. 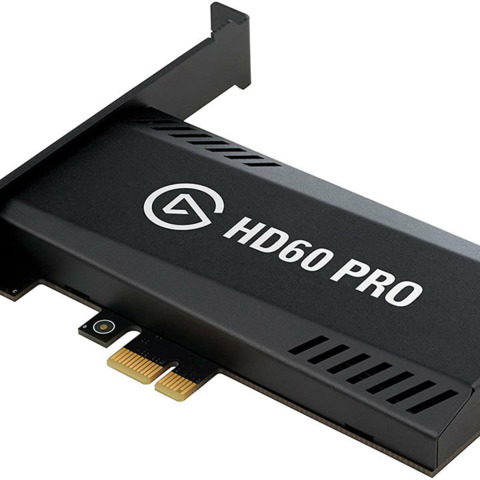 The HD60 Pro is a version of Elgato’s internal PCIe capture card that supports capture and passthrough up to 1080p and 60 frames per second. It has fewer features and capabilities than the 4K60 Pro, but it also comes at a much cheaper price. If capturing in 4K HDR isn’t something that interests you, then the HD60 Pro video capture card is more than enough to handle your streaming and recording needs, especially if you’re an aspiring streamer or YouTuber.

What to look for in a capture card

The first thing you should consider when picking out a capture card is how you’re going to use it. If you plan on doing a lot of streaming at home and want to keep things relatively clutter-free, then an internal capture card that you insert into your PC’s motherboard, such as the Elgato 4K60 Pro, is a great choice that offers excellent quality as well. Portable capture cards, like the Elgato HD60 S+, are great for those who want the flexibility of being able to take it wherever they need to go–though in most cases, you will need a laptop nearby if you plan on traveling away from home and using your capture card. Once you’ve figured out what suits your needs best, choosing the right capture card is much easier.

From this point, you need to consider the platforms you’re going to be recording. Capture cards have a variety of features that can either take advantage of your platforms’ features or restrict them entirely if you don’t buy the right device for your setup.

You’ll notice that each capture device has a different range of pass-through, including 4K passthrough. This refers to the signal that the capture card is able to “pass through” itself and on to your own screen while recording. In some cases, a gaming capture card is capable of capturing certain resolutions and refresh rates while passing through higher resolutions and refresh rates–for example, capturing 1080p and 60Hz but passing through 1440p and 144Hz. The passthrough capabilities of each device are different, so be sure to think of your setup and what device can accommodate your gameplay footage and 4K passthrough needs.

Thankfully, if you’re strictly a console gamer, then you’re covered on all fronts for now. The PS4 Pro and Xbox One X are capable of resolutions up to 4K with 60 frames per second, something multiple capture cards are capable of recording directly from the game console. Several consoles also feature HDR support, and while you may want to record everything you’re able to see from your console, HDR capture isn’t necessarily something you should worry about. HDR stands for high-dynamic range, which refers to the range of colors a device and game are able to display. TVs and content that support HDR often have beautiful bright colours, making a huge impact on the overall image quality. Capturing HDR footage from your gaming console is an appealing prospect, but it requires expensive equipment and only people with HDR-capable screens will be able to enjoy it. If you still want to experience your console’s HDR for yourself, then you’ll want to keep an eye out for devices capable of HDR passthrough.

There are quite a few professional-grade capture cards out there that are made for filmmaking and cameras. These can work with consoles and your PC, but they’re very expensive and totally gratuitous for the content most YouTubers and Twitch streamers make. We left these types of products out and focused on the best capture cards that will be most useful for video game content creators.

The products discussed here were independently chosen by our editors. GameSpot may get a share of the revenue if you buy anything featured on our site.