From ‘Pokémon Legends: Arceus’ to ‘Elden Ring,’ here are some of the games we’ve enjoyed the most this year. What are yours?

What a year for games 2022 has been so far. The first three months, in particular, were incredibly busy, with a number of major releases that were supposed to come out last year being pushed back.

While there’s still half a year left, a number of games have already made their case for being among the best this year. And the midway point is always the perfect time to look back at what’s already come out. So we took it upon ourselves to list some of our personal favorites for the year so far.

The supposed strongest contender to win this year’s Game of the Year, Elden Ring is developer FromSoftware at its finest, exhibiting what many have praised as a masterclass in game design that’s rarely seen in the industry. It’s a game that both rewards and punishes your desire to explore its breathtaking open world. And, boy, is there no better feeling than wandering some distant castle and getting crushed by a giant boss. At times, the world almost feels overwhelming, but there’s nothing quite like the satisfaction of uncovering secrets or overcoming a grueling encounter.

Evil Dead: The Game is by no means perfect, but it delivers some of the most genuine fun we’ve ever had with some friends in a long while. This asymmetrical multiplayer horror game takes the successful gameplay formula of Dead by Daylight and adds a few fresh twists that enhance the overall experience. And it does all this while leaning heavily into the campy charm of the films it’s based off of. Despite some technical issues and the lack of a single-player campaign, there’s a good amount of thrill to be had here, regardless if you play as a survivor or a Deadite.

Perhaps the most ambitious Lego game yet, Lego Star Wars: The Skywalker Saga delivers a delightful sandbox that pays reverence to its well-beloved source material. Tea Star Wars universe has always felt like a great fit for the Lego license, and that’s never been more true here, with hundreds of characters and dozens of planets across the nine mainline films lovingly recreated in plastic form. While the simplistic gameplay and family-friendly aesthetics isn’t for everyone, no Star Wars fan could probably resist the opportunity to play as their favorite characters while reliving iconic moments from the saga.

Oozing nostalgia by the bucketloads, Teenage Mutant Ninja Turtles: Shredder’s Revenge is an arcade era gamer’s dream. This side-scrolling beat ’em up features a fast and fluid combat system that fans of this genre know and love. All the turtles have their own unique set of moves and combos. On top of that, everything from the retro art style to the catchy background tunes also hit the mark. It’s a modernized classic that makes us miss the games of yesteryear.

Oh, here’s a tip: In case you haven’t bought the game yet, it’s available on PC Game Pass, which is perhaps the most accessible way to play with some friends.

Tunic is one of those indie games that stole our hearts from the opening seconds. Don’t let its adorable protagonist and colorful art style fool you, this is an enthrallingly challenging adventure-puzzler that could rival some of the most punishing Soulslike games. But it’s exactly that challenge which pulls you back into its Zelda-inspired world teeming with secrets and mysteries to discover. 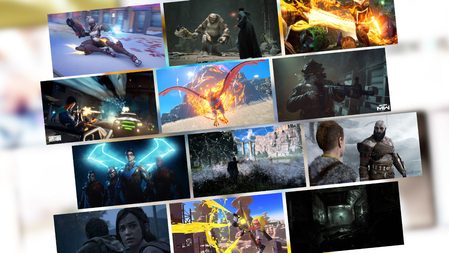 Leave it to Sony to deliver AAA blockbuster experiences on the PlayStation. Horizon Forbidden West is an impressive, story-driven open-world game that builds upon the already solid foundation laid by 2017’s Horizon Zero Dawn and then some. This sequel is very much an improvement to the original in almost every aspect. It even has a bigger and denser world to explore that’s packed to the brim with activities to do.

Horizon Forbidden West is available on PS4 and PS5.

Pokemon Legends: Arceus feels like the next big step forward for the aging core gameplay and mechanics of the long running Pokemon game franchise. It brings back that sense of adventure in your journey as a trainer by putting a deep focus on exploration, crafting and, of course, catching Pokemon, which now feels more alive than ever. Is it the best Pokemon game to date? That’s up for argument. What we can say for certain, however, is that there’s plenty to love here for new and returning fans alike.

The game is available exclusively on the Switch. – Rappler.com