Zorro is a name that goes back a long time. From television shows to movies, and now video games. Zorro: The Chronicles is developed by BKOM Studios and published by Nacon. It is based upon the animated cartoon of the same name following Diego and Ines as the titular character. Here is our review of it.

The first thing I can say about this title is how much goofy fun it is. As you sword fight your way through hordes of guards you will eventually hit combos where you do a special attack. Zorro’s famous Z is etched onto shirts, armor, and even pants. At least the pants that aren’t cut at the belt and dropped down below the guards knees. Other attacks have you kicking them into trees or crates, and you can even knock them into horses and then they kick the guards to the ground. 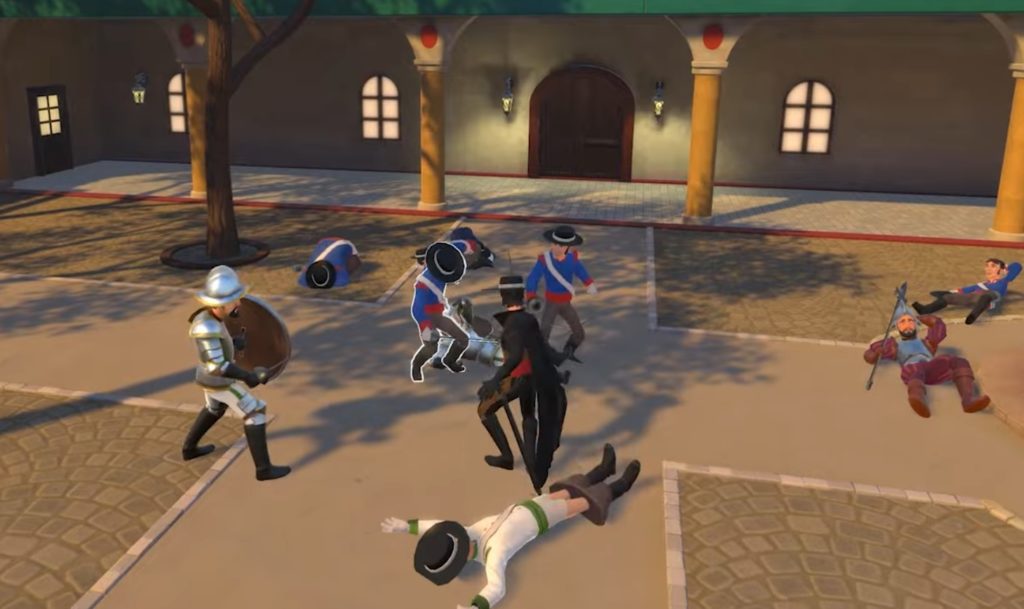 The sword fighting mechanics are pretty simple. You hit a couple of attacks in a row for a combo and when you build up your energy bolt you get a special finisher. The finisher is also done when you defeat a bad guy automatically. Each character, whether it’s Diego or Ines, has their own flair for the attacks as well. It is pretty funny watching some of the attack effects each character has.

The world map is how you go from task to task. There are 18 of them on the main map and you can go in order or skip around a little bit but only within one or two missions of where you just completed. There are two types of missions for you to select for each task. The stealth approach or the combat entry. The stealth approach allows you to join the mission without having to do anything directly. You will sneak around trying to find what you are looking for on the map without being seen. The combat entry puts your right into the fight and you will start fighting from the get-go to complete your mission.

The skill trees open up after you earn enough Zorro Coins from the missions. You find these coins from enemies as well as breaking barrels and crates around the map. Each skill gives your character different attacks and options for attack or defense. There are a ton of skills that can only be purchased once you open up five main skills. These skills are pretty fun to learn.

There are a couple of things that I don’t like about this game though. Mostly camera angles. When you are moving around the camera will go wherever you want it to as you spin the right joystick around. The main problem I have is that there is no adjustment available to the sensitivity of the camera. Depending on how you look it spins very quickly and I got very easily motion sick. I had to stop playing after only a couple of hours. No game is worth getting sick over. If you have a weak stomach from motion sickness it is ok to play but in small doses. The other problem is the attack camera. Once you engage become in a fight the camera locks into one place until you leave the area that you are in. But as soon as you are under attack again it locks in. This makes for some difficult gameplay trying to figure out where everyone is.

Note: This review was provided by PR on PS5 for Review.

Camera angles are to be desired
Lack of sensitivity adjustment