Are you a fan of the work of Tolkien?

If so, you’re in luck. His literary universe from The Lord of the Rings has inspired many video games over the last 40 years. Whether action-adventures or RPGs, games based on Lord of the Rings all tend to have one thing in common: they’re just as epic as the source material.

We’ve searched through the annuls of time and found the best games based on Lord of the Rings, dating from the 80s to the modern day. If you’re ready to lead your own adventure into Middle-Earth, perhaps try out some of the games. We’re pretty sure you won’t be disappointed, my precious. 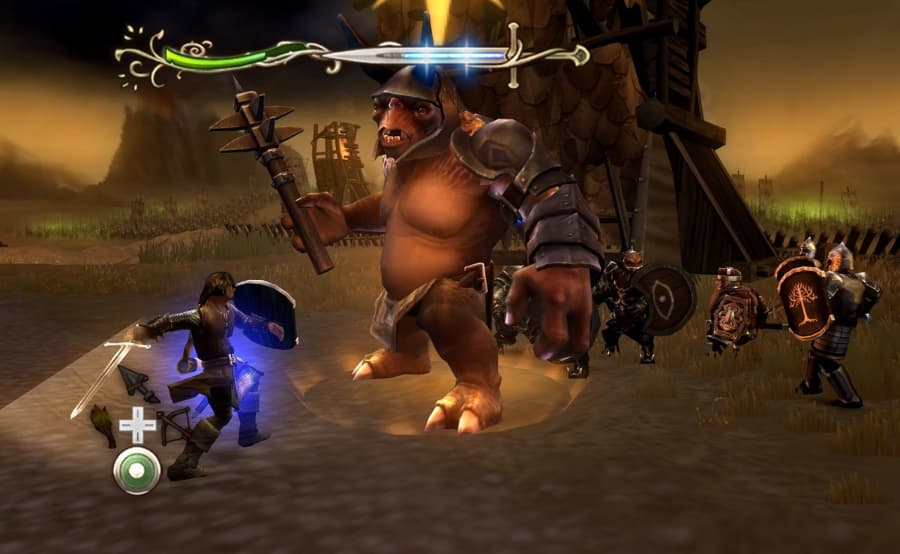 Released on the Wii, PS2, PS3, PSP and Nintendo DS in 2010, Aragorn’s Quest follows Aragorn through his new journey, set 15 years after the ending to Return of the King. It features Samwise Gamgee telling his children about Aragorn’s adventures. Sadly, the narrative isn’t that exciting, despite the fun premise of Sauron surviving and masking himself as an Elf of Eregion.

The gameplay is very simplistic, almost childlike. There isn’t much challenge to it either, with some combat sections becoming quite repetitive. Aragorn’s Quest is still a fun game nevertheless, and well worth a play if you’re a Tolkien fan. Especially as it’s the first game based on Lord of the Rings published by Warner Brothers Interactive Entertainment. 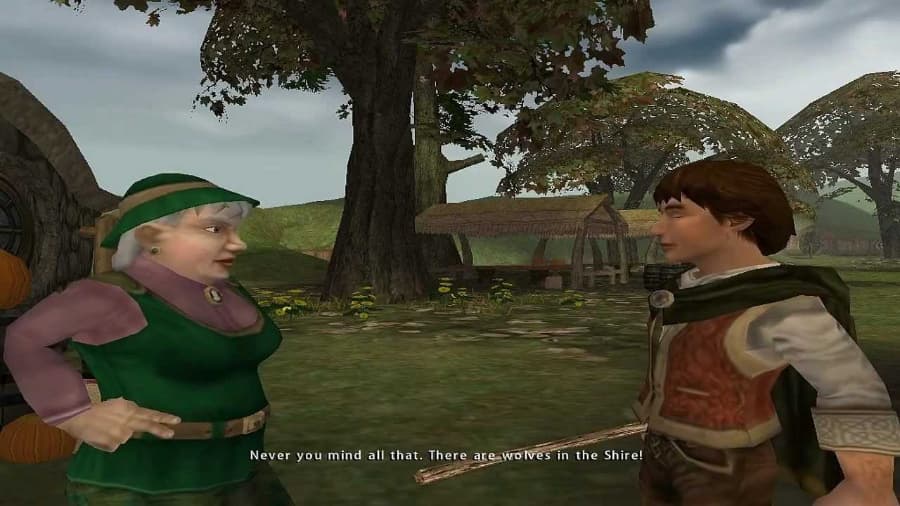 Released in 2002 for Xbox, PlayStation 2, Gameboy Advance and the PC, The Fellowship of the Ring remains very faithful to the original novel. Despite being released almost a year after the first Lord of the Rings film, and just months before The Two Towers released in cinemas, The Fellowship of the Ring has no affiliations with the Peter Jackson movies. Instead, the publisher, Black Label Games, wanted to make a trilogy of games more comparable to the Tolkien classics.

Their direction can certainly be seen in their depiction of Middle Earth; it’s much less dreamy than other adaptations. The Shire, in particular, is very beautiful, even if rough around the edges – but we can forgive the 3D graphics of 2002. It was great to see Tom Bombadil appear in the game, help make this one of the best games based on Lord of the Rings for die-hard fans. 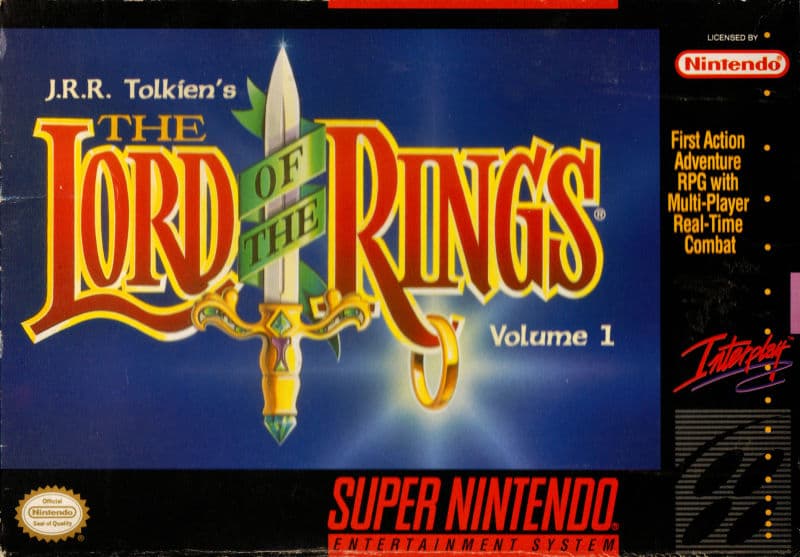 Released in 1994 for the SNES, this action RPG followed the fellowship as they went on a variety of quests. It doesn’t quite follow the plot of the novel; amongst other things, Boromir was pretty much left out of the game despite the inclusion of all the other characters from the fellowship. Players could play as any of the hobbits, Aragorn or Gimli, and the game supported up to four players.

JRR Tolkien’s The Lord of the Rings, Vol. 1 takes the adventure to some of the most iconic areas in Middle-Earth, but it isn’t always the most exciting of games. Quests eventually turn into little more than fetch missions, and the story rarely includes anything to keep you on the edge of the seat. Despite this, being able to play a Lord of the Rings game with four players locally makes this an unforgettable Lord of the Rings game, and the leveling up mechanic kept fans coming back for hours on end. 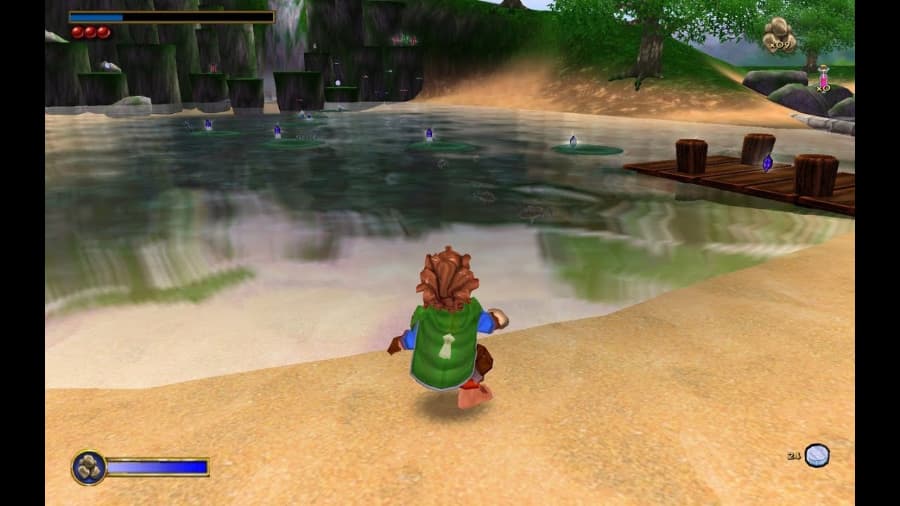 Released in 2003 for Xbox, PlayStation 2, PC, Gamecube and Gameboy Advance, The Hobbit closely follows the plot from Tolkien’s classic novel. Released well before the Hobbit movies, and taking little influence from the Lord of the Rings films, it’s a game that was made for true fans of the novels.

A 3D platform game, The Hobbit allows the player to fully explore some of the most iconic settings from the novel. It’s also one of the few platforming games based on Lord of the Rings, and that alone makes it one of the best. The Hobbit does include some very simplistic hack and slash gameplay, which does sadly let the game down. Despite this, it’s one of the more enjoyable adaptations that is true to the original novels. 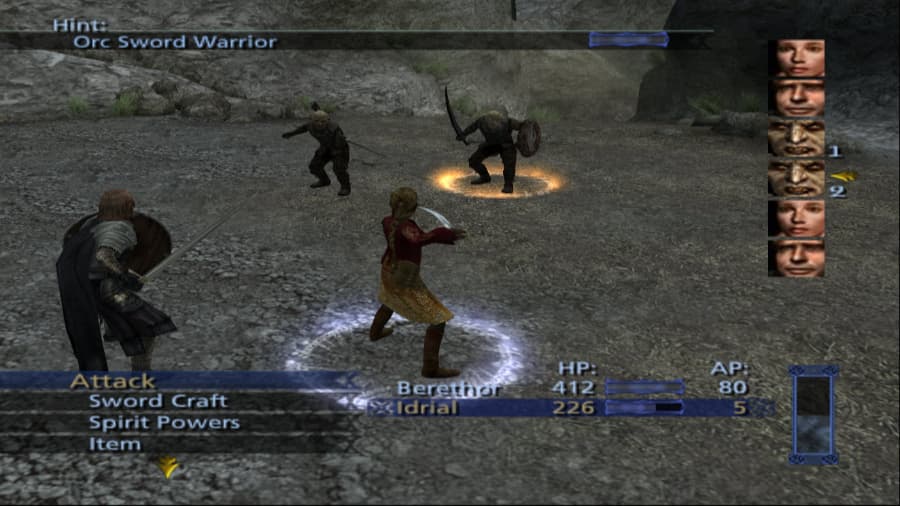 Released in 2004 for Xbox, Gamecube and PlayStation 2, The Lord of the Rings: The Third Age is an RPG which shares similarities with Final Fantasy series. Some saw this as a downside, but mixing together Tolkien’s lore with Final Fantasy gave a new twist to the growing library of games based on Lord of the Rings. The Third Age follows the fellowship through the stories presented in each of the movies, with publisher EA unable to include anything from outside the plot of the films due to not having the license for Tolkien’s novels.

Despite this, The Third Age is a deep story with much to do within it. It offers some great gameplay that stands out from other adaptations, making it one of the best games based on Lord of the Rings. 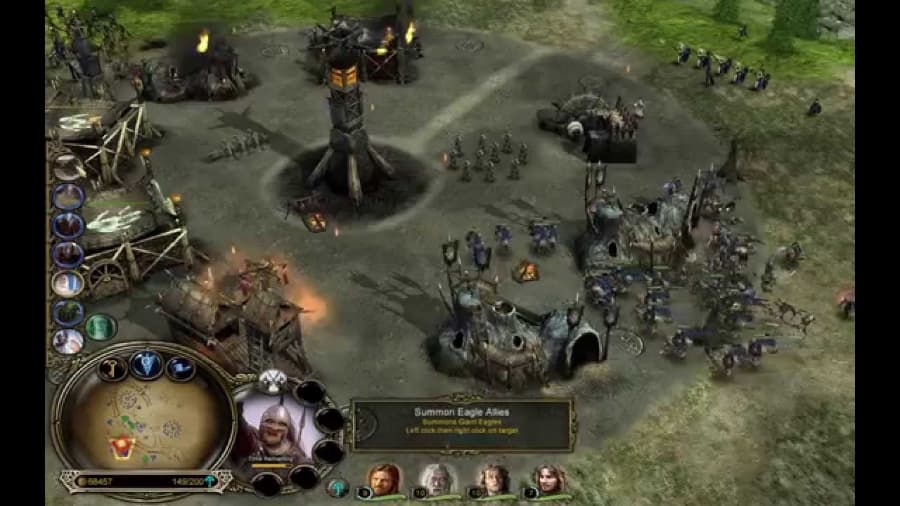 Released in 2004 for PC, The Battle for Middle-Earth might just be the most immersive Lord of the Rings game released. Unfortunately, its servers were closed down in 2010 thanks to publisher EA’s license ending. But it lives on in our memories.

The Battle for Middle-Earth was a real-time strategy game which allows the player to follow two different campaigns. More interestingly, players could shape their character how they wanted, choosing to be either good or evil. Choosing ‘good’ followed a storyline closely resembling Jackson’s movies, but opt ​​for the evil route and you’d find yourself experiencing a cool twist on the original story, with a narrative focusing on Saruman. 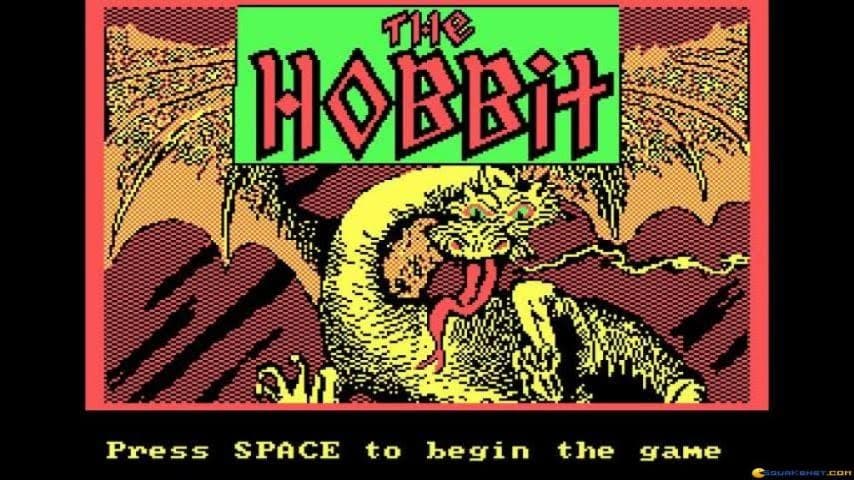 Released in 1982 for ZX Spectrum, The Hobbit told the adventure of Bilbo through text-based commands. The Hobbit was one of the best selling text-based games of all time, and many cited the addition of images as a huge breakthrough for the industry. The Hobbit was actually sold with a copy of Tolkien’s novel too, creating a new generation of Tolkien fans.

The game’s database was huge for the time, and The Hobbit boasted an endless array of possibilities and outcomes. The plot evolved and unraveled differently, depending on the player’s choice. Sadly, The Hobbit did include many bugs due to its size, with the possibility of key characters being killed off too early. Despite this, it was a breakthrough for its time, and still remains one of the best Lord of the Rings games. 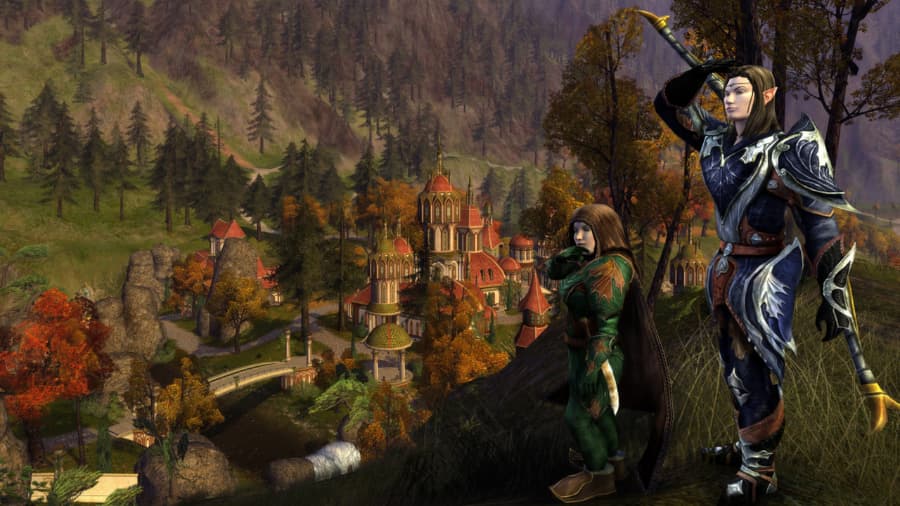 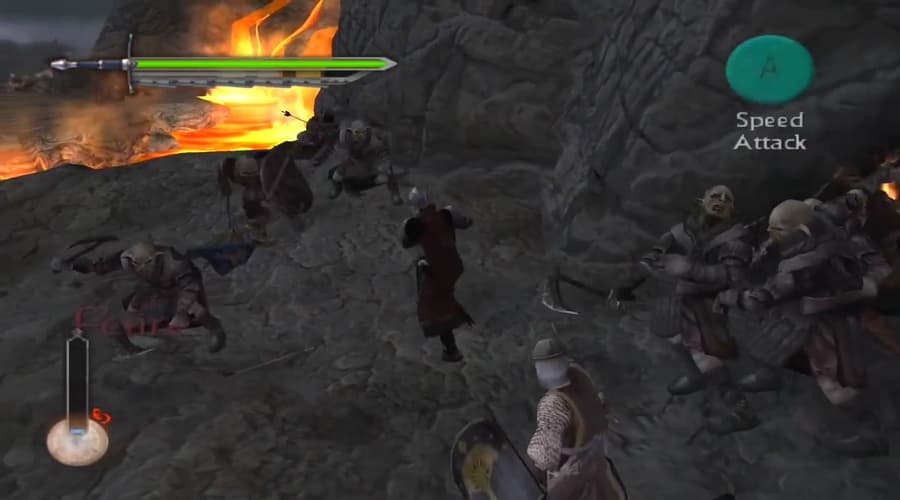 We’re back in 2002 for The Lord of the Rings: The Two Towers. Released on PS2, Xbox and Gamecube, this official film tie-in from EA is often regarded as one of the best movie adaptations. It closely follows the story of the film, even going so far as to contain actual movie footage. Players can take control of many characters from the fellowship, too, all of them being able to gain new skills as you progress.

The Two Towers also featured voice acting from the movie actors, bringing a huge level of authenticity to the game. It looked great for the time too, particularly during action-packed battle scenes – and the unforgettable Helm’s Deep level. It may be 20 years old now, but it remains one of the best games based on Lord of the Rings. 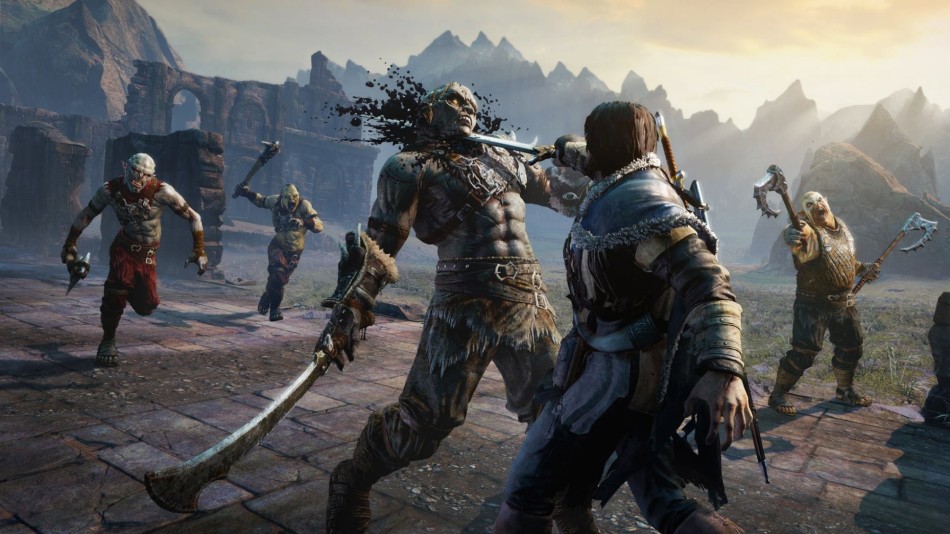 Here we have it: the best game based on Lord of the Rings. Released in 2014, Shadow of Mordor is the finest Lord of the Rings adaptation there’s ever been. It does take a few creative liberties with Tolkien’s classic story, but they’re easily forgiven; this is still a thoroughly authentic Lord of the Rings experience, and the closest we’ve ever come to experiencing the true Middle-Earth. Shadow of Mordor‘s open world may be a little sparse, but the story and Nemesis System more than make up for this.

Set before The Fellowship of the Ring, the protagonist Talion seeks revenge against Sauron for the death of his family. The Nemesis System allows each enemy to have their own identity, while also creating a living world.

A sequel, Shadow of War, released in 2017, which expands on the same mechanisms. It has another great story and introduces new elements, but it doesn’t quite reach the heights of its predecessor. Shadow of Mordor brings Tolkien’s vision to life in a way that no adaptation before has ever done.