Share prices of Take-Two Interactive (TTWO -2.69%) are currently down 31.5% year to date. That significantly underperforms the 12.3% fall in the broader market as measured by the S&P500 index.

It hasn’t been a good year for growth stocks that trade at relatively high valuations. Take-Two is particularly getting slammed because it lacks immediate growth catalysts in 2022, such as blockbuster new releases, to drive meaningful growth in revenue and earnings per share.

However, the sell-off in Take-Two might be overdone. Market participants are missing how two recent releases within the Grand Theft Auto franchise could juice Take-Two’s earnings growth in the next year. 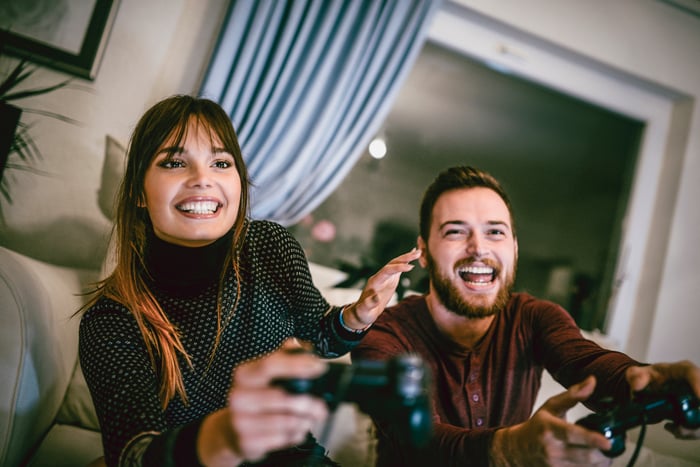 On March 15, Rockstar Games, the Take-Two studio that operates the Grand Theft Auto (GTA) franchise, released a stand-alone version of the game’s multiplayer feature Grand Theft Auto Online. GTA Online was previously included for free as part of the main game, but after becoming one of the best-selling video games of all time over the last decade, management is moving to further monetize its top gaming property.

To understand the potential financial impact of this move, think of Grand Theft Auto like a sandbox. Players can hook up online with friends to complete tasks to earn in-game rewards. Rockstar has supported the game with ongoing content updates to keep the gameplay fresh and exciting for players. Take-Two’s continuous financial support of the game’s development is a large reason the latest iteration in the series (Grand Theft Auto V) has sold over 160 million copies since launching in 2013.

By separating the multiplayer feature (GTA Online) from the main game, Take-Two can pad its revenue and profits with the game’s large base of players. It will be available free on sony‘s PlayStation 5 through June 14, but then players on both the PlayStation and Microsoft‘s Xbox consoles will have to pay $20 to buy it. That’s on top of the $30 retail price to buy the premium edition of Grand Theft Auto V on both consoles.

What GTA Online means for the bottom line

Analysts expect Take-Two to report adjusted earnings per share for fiscal 2022 (which ended in March) of $4.94, which is down 25% over fiscal 2021. But next year, estimates call for a rebound in earnings, reaching $6.19. This is consistent with management’s guidance that fiscal 2023 will see sequential growth in bookings, a non-GAAP (generally accepted accounting principles) measure of revenue.

Management hasn’t updated guidance to reflect the sales expectations of GTA Online, since it was just released in March. Nevertheless, the extra revenue from GTA Online should help offset costs to support future updates to the game. On that note, players shouldn’t be too upset to pay extra for what was previously a free feature of the game. The extra revenue could signal big plans management has for the future development of the franchise. But it appears to be a move to capitalize on the game’s demand and push the company’s margins up.

Even before releasing GTA Online in March, Take-Two’s margins had been trending up over the last 10 years. This has been a key catalyst in growing the company’s earnings and lifting the stock price, and the stand-alone release of GTA Online suggest there is more improvement to come. 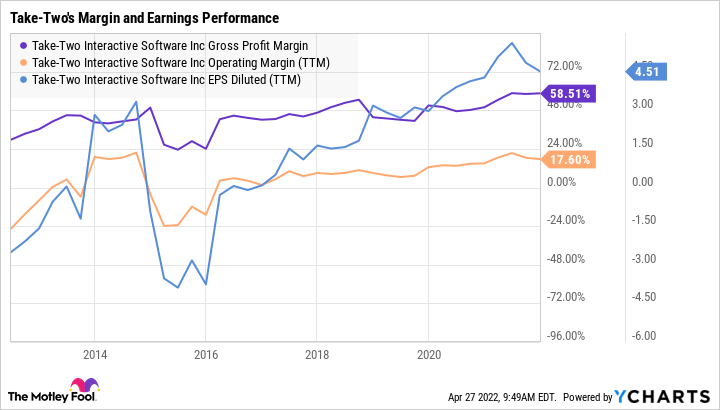 Within weeks after launching GTA OnlineRockstar Games announced a new subscription service, GTA+, on March 29. For $5.99 per month, players get access to additional in-game perks, including virtual currency to unlock content and other goodies. It’s unknown how much demand there will be for GTA+, but virtually every dollar of that $5.99 should drop to the bottom line since it doesn’t really cost anything to issue virtual currency and other cosmetic items.

Investors should take the release of the stand-alone GTA Online and GTA+ service as a sign of incredible demand for Take-Two’s most popular game.

If you’re a shareholder in Take-Two and watching the stock fall, there’s no reason to panic. There are more games on the way and, with that, more revenue, profits, and a higher stock price down the road.