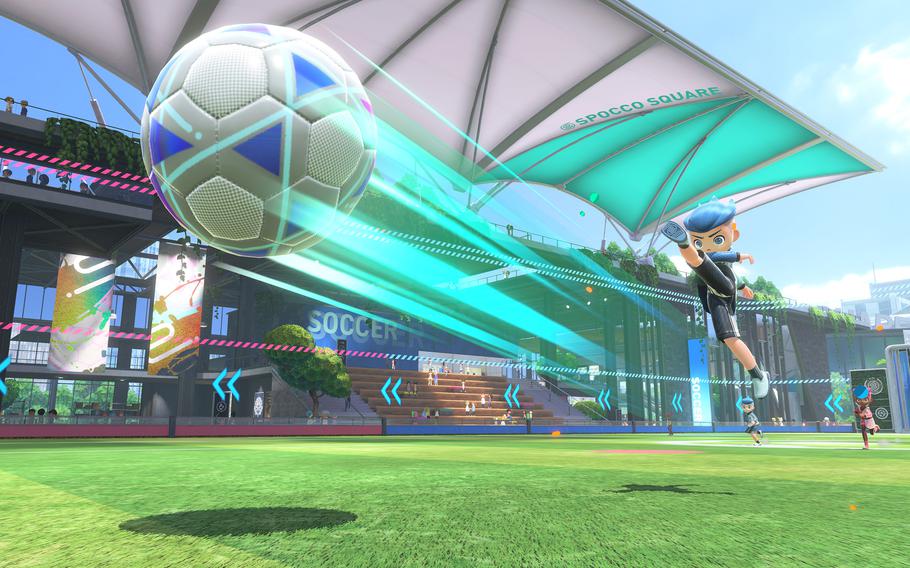 Soccer is one of the most expansive activities and includes a Shootout Mode and one with full team play in Nintendo Switch Sports. (Nintendo of America)

I’ve done plenty of virtual demos during the pandemic, but there’s no replacing an in-person preview. Sometimes you have to be there holding a controller in your hand to properly assess a game, and in the case of Nintendo Switch Sports, that’s a necessity.

The reason it’s so important is that the latest entry to the Wii Sports series maintains the focus on motion controls. That feeling of movement and responsive action can’t be conveyed over a streamed internet connection. It has to be done live in front of an enormous TV with Joy-Cons in hand.

One of the best parts of the original Wii Sports games is how intuitive all the actions felt. Players didn’t need to think about what button swings a tennis racket; they just performed a natural backhand and saw a ball dart across the screen. That same sense of play returns in Nintendo Switch Sports but the technology that was in the Wii Remote has been shrunk down into the Joy-Con.

It still feels responsive, but players might need to adjust to the feel of the smaller controller. When it came to tennis, it took a few swings before I adjusted to a controller that felt barely there, but once in the, threes of a match, instinct takes over. I just reacted to the ball and tried to hit it back during a rally.

The unusual part about Tennis this time around is that I played doubles with myself as a partner against another human opponent. When I swung, my partner up front also swung his racket. The experience was a bit like foosball as I tried to position myself to strike the ball back.

Badminton was a sport I watched during the Tokyo Olympics, and it’s a new activity in Nintendo Switch Sports. Instead of swinging horizontally for most of the match, this game required players to swing with overhead strikes at times. It moves much faster as players knock the shuttlecock back and forth, and at the same, time there’s slightly more strategy as players have to time their strikes and position them with an eye toward toward the back end or front-of-the-net drop shot. The second is done by holing ZR while swinging down.

Bowling returns with a few compelling twists. One of the changes that Nintendo introduced is the idea of ​​mini golf-inspired obstacles in the lanes. Players will be throwing the ball uphill or through moving blockers in order to hit the pins.

The game I played was simultaneous multiplayer bowling. This mode supports up to four players locally, and it’s a regular bowling contest except everyone’s turn happens at the same time. It’s ideal for parties because this mode speeds up the process so that everyone gets to play and the rounds don’t drag on because they don’t have to wait for their turn.

Bowling also features an online survival mode where 16 players compete until there’s one champion. It’s essentially a bowling battle royale. As for how it controls, the game feels just as goo as the originally with the ability to adjust where you throw and the angle of the toss. I felt like I could put some spin on it if twisted my wrist as I threw holding the ZR button. If you let it go, the avatar will drop the ball so you have to keep it held down through the motion. 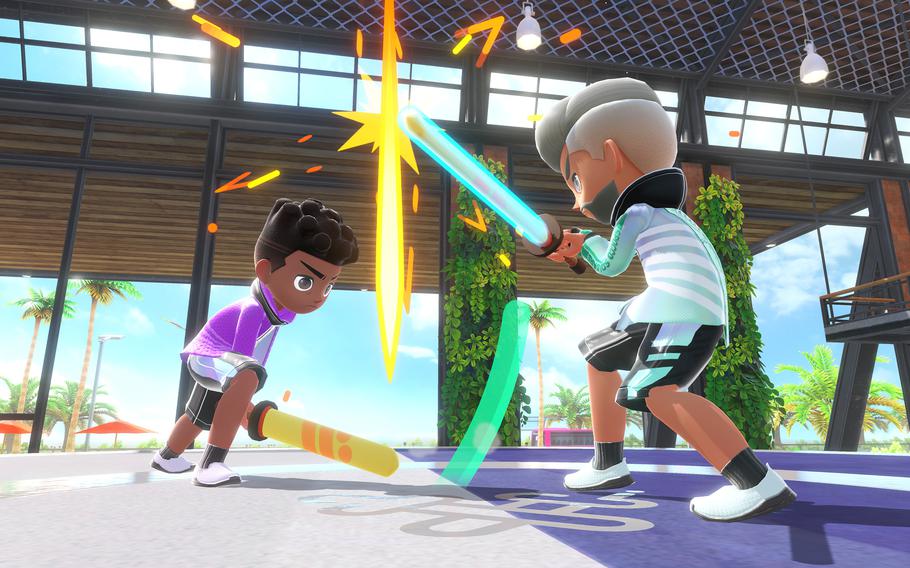 Chambara, or swordplay, is one of the returning games in Nintendo Switch Sports. (Nintendo of America)

Swordplay returns in the form of Chambara, which is a one-on-one combat sport where players try to knock each other off a shared platform. Players can choose one of three weapons: a sword, a charge sword and twin swords. They then try to strike their opponent.

The key to scoring a hit is that players have to swing in the same direction as their opponent’s sword. If it’s held vertically, an overhead strike will suffice. If they’re holding it horizontally, a wide swing will knock them back. If they’re holding it diagonally, a slash in that same direction will register a hit. At the same time though, players can defend by holding their sword perpendicular to the swipe.

If players successfully block, there’s a short window where they can counterattack. Scoring successive hits knocks an opponent back so that a final blow sends them into the water below. The contest is played to a best of three, but if it’s tied after the third round, players enter a tough Round 4 where the platform shrinks and a single good strike could send an opponent into the drink.

I had some decent fun but it doesn’t have the responsiveness I was looking for. The tension and strategy was there but trying to get a hit in with speed was difficult. 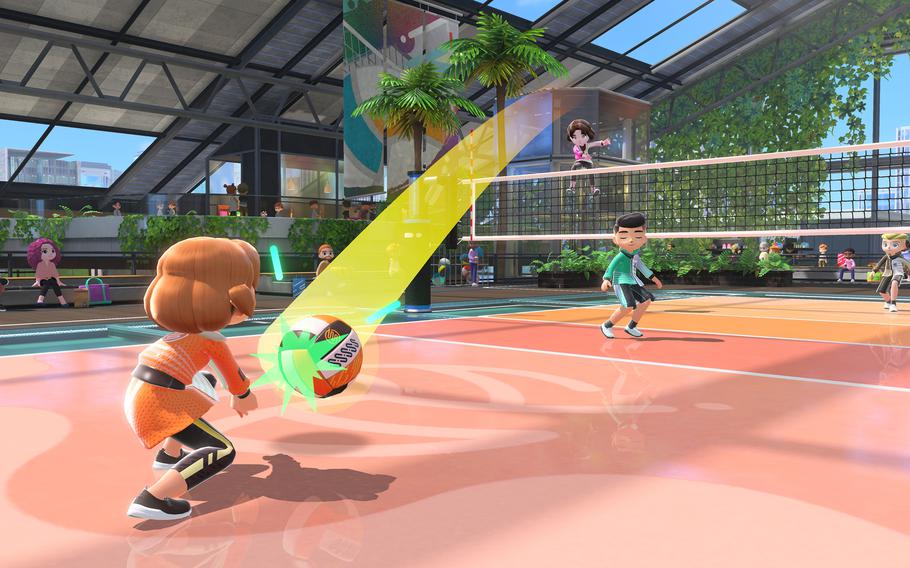 Volleyball is one of the most enjoyable additions to Nintendo Switch Sports. (Nintendo of America)

Of all the new activities, volleyball was my favorite sport. Players have to learn five moves to play: the serve, the bump, the set, the spike and the block. Performing the moves are all intuitive with the serve being an overhead gesture. The bump is an upward motion as you would do in real life. The set has players pushing the ball in the air almost like a basketball touchpass. The spike is another downward motion while the block is done by raising the hands.

Again, by playing as I would in real life, I had a quick grasp of how to play volleyball in Nintendo Switch Sports. The only difference is that I didn’t need a 40-inch vertical or athletic quickness of a panther.

Volleyball and much of the other sports in the game rely on timing. It’s not how fast or hard you swing your arm down on a spike; it’s more about getting the timing down so that when you bump the ball, you hit it right when it reaches your avatar. If done correctly, the ball glows purple and each perfectly timed move, adds even more power to the ball so that the final spike can become exceedingly difficult to return.

I played volleyball with an AI teammate and we went up against another person and AI, and the match was tense and fun throughout. Players can position themselves to block spikes or bump the ball. Nailing the timing on a bump or spike felt rewarding as I rallied from being down to getting that fifth point to win.

Lastly, the world’s most popular sport, soccer, gets its time in the spotlight. I played two flavors of the activity. The first was a Shootout mode, where I attached the Joy-Con to my dominant leg via a leg strap. From there, I had to time my kicks to lobs thrown my direction. If I swung my leg too early, the ball would fly right and if I performed the gesture too late, it would drift left. If hit it just right, the ball would spin into the goal.

The shootout alternates between two players if they have two leg straps. After successive goals, the shots become harder as the goal narrows so that players have to nail that timing just right. The other mode is a full-blown soccer match goal with motion controls thrown in. It requires two Joy-Cons and that allows players to move around the pitch with the analog stick. They can jump by pressing the B button and sprint down with a turbo button but players should use that judiciously because it takes up stamina.

What’s interesting is that players can combine gestures and button presses for different maneuvers. If players jump and swing down with the Joy-Con, they can perform a bicycle kick. If they punch the two controllers forward while running they can execute a header, but that’s a risky move because of the lengthy recovery time.

The team soccer has the feel of a Rocket League match even if I was applying alongside AI teammates. The game will support up to 8 players online so it could have potential for competitive play. 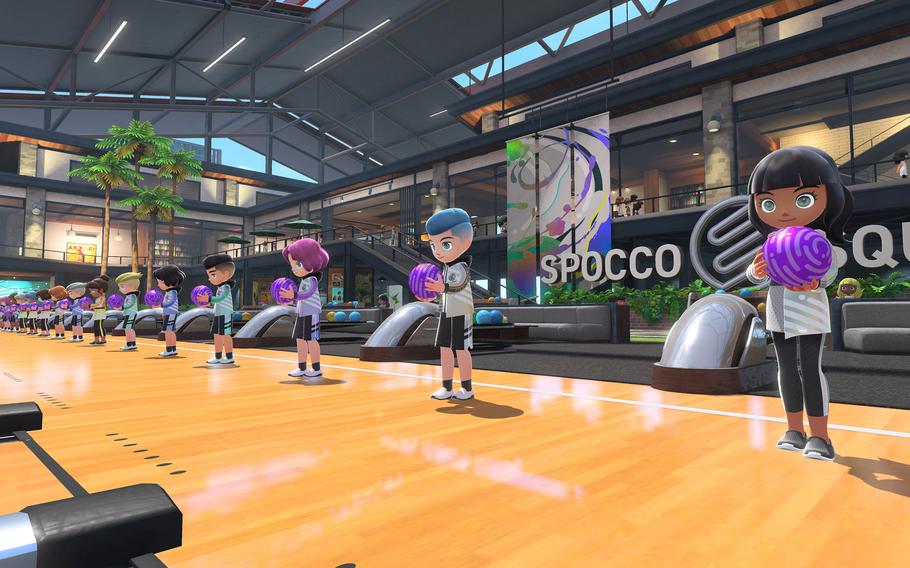 Nintendo Switch Sports features online play across all the activities it offers. (Nintendo of America)

Speaking of which, Nintendo Switch Sports is different from its predecessors because of its online support across all activities. The game will even have a ranking system based on players’ skill levels so that they’re matched up with the right competitors.

The online play is also how players earn some of the customization options for their avatars called Sportsmates. Decking out avatars in nifty gear is how players will stand out from the crowd and how they’ll tell experienced veterans from rookies. If fans are feeling nostalgic, they can also throw their Mii into the mix.

The physical version of Nintendo Switch Sports with a leg strap will go on sale April 29 for $49.99. The digital version sells for $39.99. For those who have Ring Fit Adventure, the leg strap for that game will work for this upcoming project. A separate leg strap can also be found online for about $10 or you could duct tape a Joy-Con to your leg though that wouldn’t be advisable or as convenient.

In addition, Nintendo Switch Sports will be getting an autumn update that adds Golf to the mix. Another update for soccer will offer more ways to play with the leg strap.