MP1st ventures into the harsh desert world of Arrakis in our latest hands-on with Shiro Games’ upcoming real-time strategy game, Dune: Spice Wars. Is this a spice worth trying or is it better left untouched? Read on for our hands-on impressions.

Welcome to Arrakis, A World of Suffering

While not the inventor of the genre, the original 1992 Dune video game and its follow-up, Dune 2 are regarded by many as the “grandfather” of real-time strategy games. While there certainly were other titles that filed the RTS role quite nicely, none of them hit like Dune did, as it brought forth much of the genre’s staple pillars, such as resource-gathering, factions, building, and so much more. In fact, the original releases were such a massive paradigm shift back then that nearly 30 years later (god, I’m getting old) they’re still serving as a template for many of today’s biggest RTS. Of course, the genre has evolved in that time between, but there’s no denying that Dune and its developers changed the landscape and paved the way for other RTS such as StarCraft and World of Warcraft.

So, of course when Shiro Games announced that they would be developing a new Dune RTS, my excitement level was through the roof. Now, to be clear, I didn’t go into this hands-on expecting the studio to innovate like the original Dune titles. No, I went into this as a long-time fan wanting to once again revisit the hellish world of Arrakis to wage yet another Spice War. To cut to the point, my time with Dune: Spice Wars was good…like, really good.

Before I do dive into this preview I would like to clarify that this is an early access version of the game, which is, more or less (if not the same), that’ll be launching today. A lot of the planned content is still in development, and will be rolling out as the early access phase progresses. This by no means a review, so don’t expect a score at the end of this hands-on impressions piece.

“He who controls the spice, controls the universe,” a phrase Dune fans are all too familiar with, and if the history of the franchise has taught us anything, that’s easier said than done. A lesson I learned all too quickly in my hunger for the Spice Blend. Like many RTS before, my journey into the Spice War began with pledging myself as the ruler to one of the four factions, those being; House Atreides, House Harkonnen, The Smugglers, and The Fremen, with a fifth planned to roll out sometime during early access. 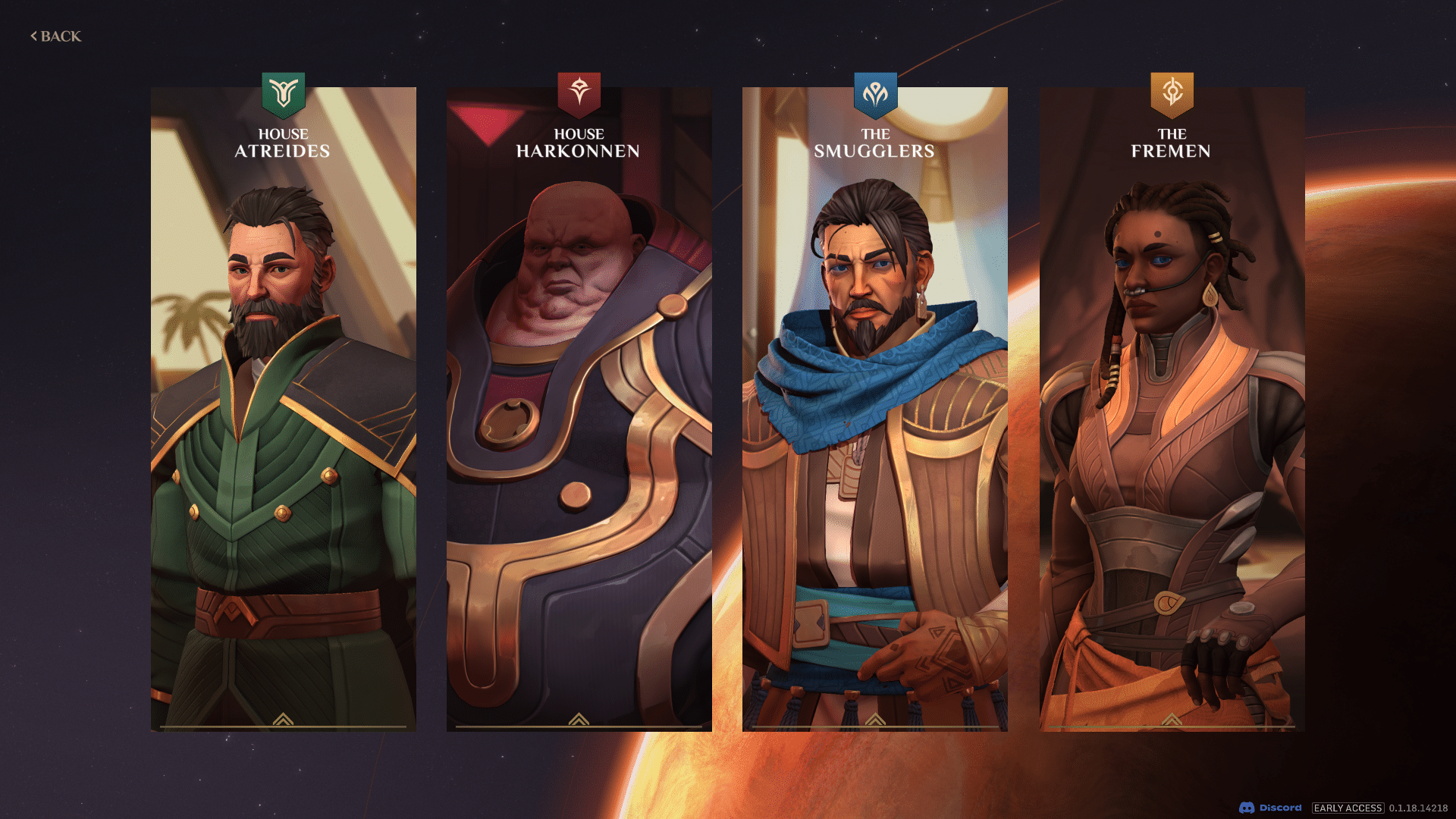 All these factions have their own govern of rule, fitting either as a pacifist, rebellion, believer in democracy, survivor, and of course, conqueror. I sided with House Harkonnen for my first run, as I always enjoy going with the direct approach of war in an RTS, and having perks geared towards waging it. This meant that I solely focused on the expansion of my army, earning resources by the means of conquering and pillaging villages rather than through diplomatic approaches. Of course, that didn’t sit well with House Atreides and the other factions who sought alliances, and building trade relations, but I didn’t care. I wanted it all, and would, by every means possible, do everything to achieve that. Sadly, the environment of Arrakis wasn’t something that I was quited equip for, as I found my tyrannical run overturned by nearly everything this harsh and unforgiving planet threw.

While my army grew, far beyond the view of my conquered land, other factions were building alliances and sharing resources amongst each other. I didn’t know this at first, but slowly, they started sending forces to push me back, causing me to lose critical facilities to produce resources. No resources, meant I could no longer fund the growth of my military, as well as pay the economy’s crippling spice tax imposed by the empire.

I wasn’t too worried though, as I still had a sizable force to make a comeback. So I gathered them all up for one last push in an effort to reclaim all that was lost. I started recapturing the closest points, and was met by some light resistance that was quickly dispatched. With some motivation from that small skirmish, I decided to keep on pushing.

A sandstorm started to roll in, causing me to lose a scout ship. Not the biggest loss and it gave me enough information of what was ahead to know that I was more than ready to capture the next point. So once again, I feel my forces out knowing they’d have enough supplies to make the trip. As they were nearing their target, the ground suddenly began shaking. Having an idea what to expect from the films, books, and the classic games, I knew this was not a good sign at all. Sure enough, the ground started opening. This opening, as it turned, was the mouth of a massive Sandworm. In one fell swoop it had engulfed nearly all my soldiers, with those remaining severely damaged and now beginning to starve to death. My army had been crippled, and not by some rebellion, or a defender of democracy, but by a being worshiped as a god that pledges no allegiance to anyone. I was defeated, my two-hour run ruined because I got selfish and thought I could brute force my way to victory.

Now to be perfectly clear, this was more of a goof around run to see how much of me doing things wrong would have a reactive response in the world. Me ignoring the 20-day house votes, not paying taxes, and objecting to everything another faction had to offer. A lot of freedom in how I wanted to run things, even if it wasn’t the best way to run, and I’m glad to see the world react consequently to those choices. 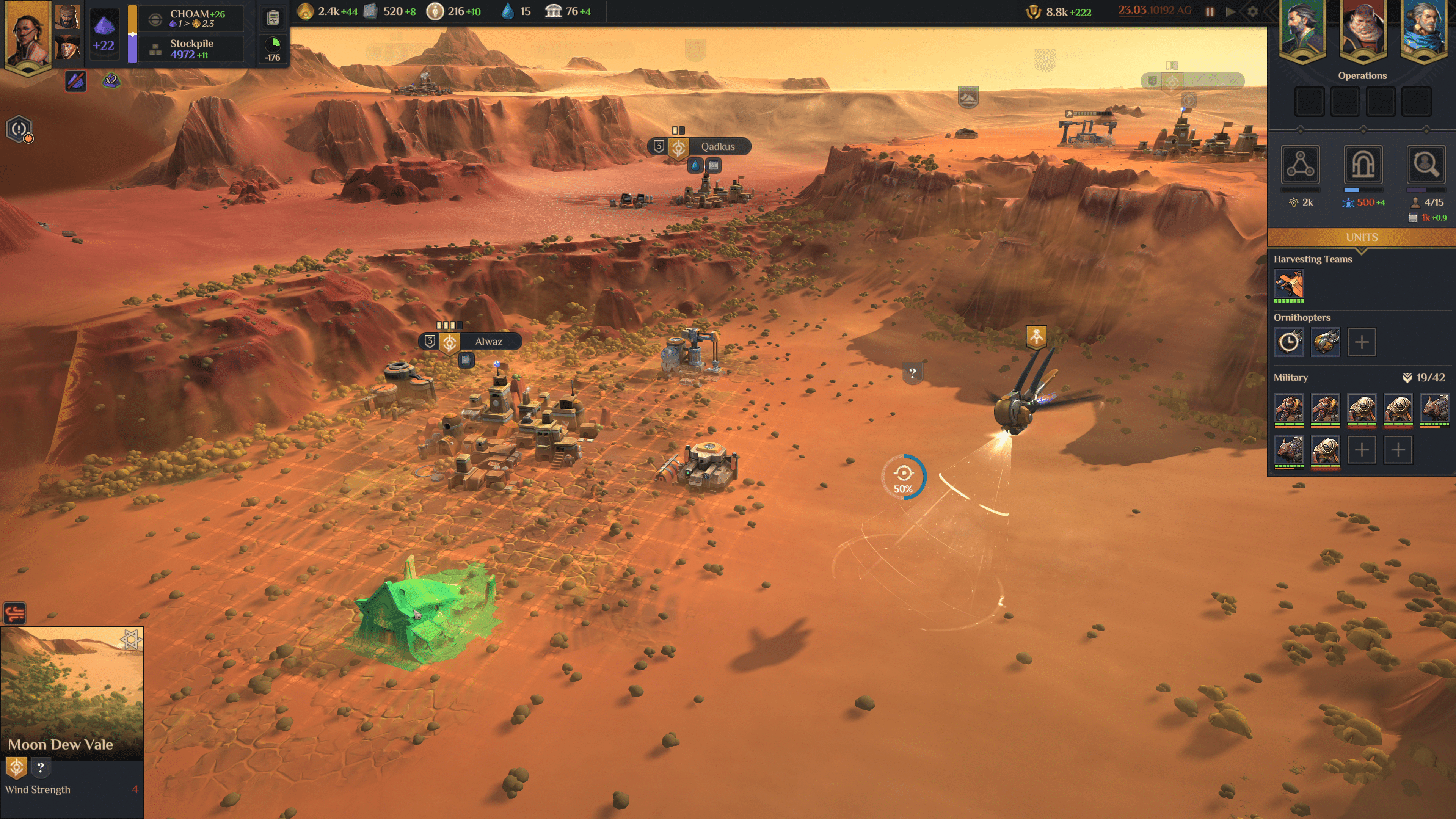 Take the spice tax for example. When you find a spice depot you can build a spice harvester and over the course of time, farm spice. Spice can either be converted into currency, which helps fund settlements, army, and other ventures, or stockpile in order to pay a hefty spice tax and build up, which controls how much influence you have over critical faction voting and other political decisions.

I chose to ignore this tax at first due to not having a steady amount of currency coming in, but was eventually feeling the weight of regulation passing, and not having enough votes to counter them. So that shifted to me allocating a certain amount of my spice towards the tax, while having enough to fund my military and other settlement needs. It did eventually get to the point where I couldn’t get more spice depots due to other factions occupying them, and eventually I started dipping into the red on resources as the taxes continued to increase.

This resulted in conflict in my own faction, with settlements threatening to leave it for a better life, and even my own military deserting. Not a complete surprise since I wanted to rule as a tyrant who wanted nothing but war, but it was neat to see the world react like that. Even other factions at times would send messages about my actions going unpunished, and how they won’t forgive me for doing certain things, which they didn’t as evident by the mass attack they orchestrated to put further pressure.

That was my first run, and understanding how the world works a bit more, I decided to start fresh, only this time playing as House Atreides, the faction geared towards players who prefer the diplomatic approach. I really enjoyed how they handled themselves, as while the Harkonnen would use force, House Atreides used words to resolve issues. Certain conflicts can be resolved simply by coming to agreements, and although a bit longer than the methods employed by Harkonnen, I found the efforts to be satisfying, and in the long run, more rewarding as factions would aid one another, and share trades.

I don’t want to spend too much time on this preview as the content is rather light, but I will say that Dune: Spice War is shaping up to be an excellent RTS. Like I said before, I really enjoyed my time spent with it. It sticks to the source material, and although not as genre moving as the original, it captures the very same joy I had for it so many years ago. Dune fans will be delighted with what’s offered here, but as noted, it is in early access, so it may be best to wait for the final 1.0 product. It goes without saying that it does have some faults, such as some balancing, and general improvements needed for the tutorials, but that’s what the early access phase is for — to work out these issues and build the best game possible. I look forward to seeing what Shiro Games comes up with in terms of content, and higher challenges, as well as