The video gaming industry received a huge shot in the arm during the early days of the coronavirus pandemic as people stuck inside their homes kept themselves entertained.

Two years later, global interest in video gaming remains high and the industry is expected to keep growing for years to come. According to a third-party estimate, the global video gaming market could hit $546 billion in revenue by 2028, from $229 billion last year.

There are several ways investors can tap into this massive opportunity, but Advanced Micro Devices (NASDAQ: AMD), Microsoft (NASDAQ: MSFT)and Nvidia (NASDAQ: NVDA) are three solid options. Let’s look at the reasons why these are three top video gaming stocks to buy this month. 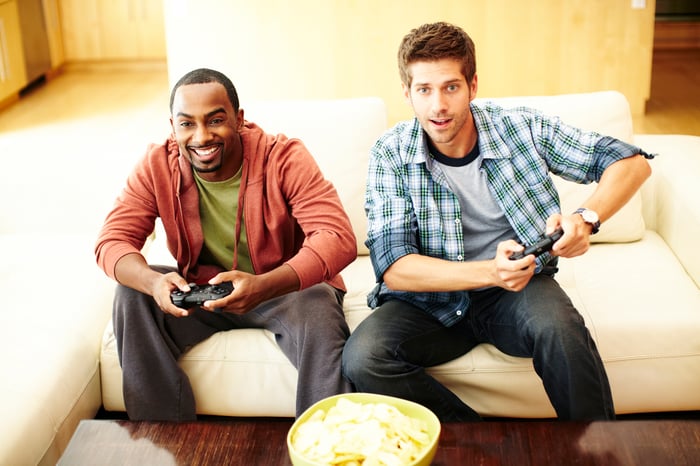 The arrival of the latest generation of gaming consoles from Microsoft and sony (NYSE:SONY) has supercharged Advanced Micro Devices’ growth. That’s because the chipmaker is supplying semi-custom chips for the Xbox Series X/S and the PlayStation 5 (PS5) consoles.

Semi-custom sales increased year-over-year as the current game console cycle continues outpacing all prior generations. We expect revenue to grow this year driven by continued strong demand for the latest Microsoft and Sony consoles.

The advantage for AMD is that the current console cycle is still in its early stages. Sony sold 17.3 million PS5 consoles by the end of last year, while Microsoft reportedly sold 12 million units of the Xbox Series X/S consoles since launch through the end of 2021. Rakuten Securities expects the PS5 to move 200 million units over its lifetime. Meanwhile, the latest Microsoft consoles are selling at a faster pace than their predecessors despite supply chain constraints, which puts them on track to exceed the Xbox 360’s lifetime sales of 85 million units.

So AMD is scratching the surface of a huge opportunity in gaming consoles, and that should ensure robust growth in the company’s EESC business in the long run. Throw in the fact that AMD stock is trading at 42 times trailing earnings right now, compared to its five-year average earnings multiple of 110 — meaning it can be bought at a relatively cheap valuation by investors looking to tap into the booming video gaming industries.

Microsoft is on track to become the third-largest video gaming company in the world once it completes the $68.7 billion acquisition of Activision Blizzard (NASDAQ: ATVI) it announced in January. We have already seen how Microsoft can gain from the hardware side of the video gaming industry as sales of the Xbox console take off in the coming years, and the company is now setting itself up to benefit from the software side.

The company acquired Activision to accelerate the growth of its gaming business across the mobile, console, PC (personal computer), and cloud platforms. Activision Blizzard has more than 400 million monthly active players spread across 190 countries, which gives Microsoft a big boost in strengthening its gaming ecosystem. More specifically, Microsoft will have 30 game development studios after the close of this acquisition, along with access to popular gaming titles such as candy Crush, Warcraft, call of duty, Diabloand Overwatchamong others.

The improved gaming library will also strengthen Microsoft’s Game Pass gaming subscription service, as several Activision games are expected to make their way to the platform. Microsoft had over 25 million Game Pass subscribers in January, up 39% over the prior year, and it wouldn’t be surprising to see the company continue to add subscribers quickly as more games are added to the platform.

As a result, Microsoft could corner a greater share of the video game subscription market, which is expected to clock $11 billion in revenue by 2025, compared to $7.4 billion last year. Meanwhile, Microsoft will also be able in a stronger position to benefit from the growth of the overall video game software market, which is anticipated to hit $159 billion in revenue by 2026.

In all, Microsoft’s improved position in the video gaming industry could accelerate the company’s overall growth. With the stock trading at 30 times trailing earnings as compared to the five-year average earnings multiple of 37, now looks like a good time to buy this video game industry titan at a relatively cheap valuation.

Nvidia is a pioneer in the video gaming industry, as its graphics cards have been powering games on PCs for decades. The company released the first consumer-grade graphics processing unit (GPU) back in 1999, and its technology has improved by leaps and bounds since then. Nvidia is now the dominant player in the multibillion-dollar discrete graphics cards market, controlling 81% of this space in the fourth quarter of 2021, by Jon Peddie Research.

This explains why the graphics specialist has been enjoying terrific growth in the video gaming business. Nvidia’s gaming revenue increased an outstanding 61% in fiscal 2022 to $12.5 billion, accounting for 46% of its top line. This segment should continue to grow at a solid pace for a couple of reasons.

First, a majority of Nvidia’s installed base of graphics cards users are still running older cards. The company’s latest graphics cards, which are based on the Ampere architecture, are reportedly used by only 15% of Nvidia’s installed base. This should pave the way for further growth in Nvidia’s GPU sales, as its Ampere cards provide a big jump in performance over earlier generations at a lower price.

Second, the market for gaming graphics cards is expected to notch a 14% annual growth rate through 2026, according to Mordor Intelligence. Nvidia’s terrific share of the discrete GPU market puts it in an optimal position to ride this momentum. Additionally, Nvidia is the leader in the nascent but lucrative cloud gaming market, which is expected to keep increasing both subscribers and revenue.

All of this indicates that Nvidia’s video gaming growth is here to stay. With the stock trading at 58 times trailing earnings, which is significantly lower than last year’s multiple of nearly 91, it looks like a good bet for investors looking to add a video game stock to their portfolios this month.

10 stocks we like better than Advanced Micro Devices
When our award-winning analyst team has a stock tip, it can pay to listen. After all, the newsletter they have run for over a decade, Motley Fool Stock Advisorhas tripled the market.*

They just revealed what they believe are the ten best stocks for investors to buy right now… and Advanced Micro Devices wasn’t one of them! That’s right — they think these 10 stocks are even better buys.

Harsh Chauhan has no position in any of the stocks mentioned. The Motley Fool owns and recommends Activision Blizzard, Advanced Micro Devices, Microsoft, and Nvidia. The Motley Fool has a disclosure policy.