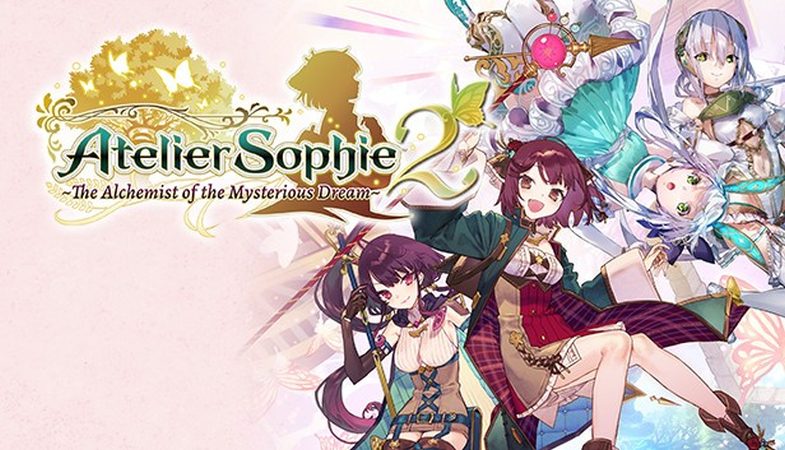 The sequel formula plays into developer Gust’s favor since it reduces time needed to publish a new Atelier game. Ultimately, the end result doesn’t diminish the formula. At the same time, Atelier Sophie 2 doesn’t do too much to improve it, either.

Atelier Sophie 2: The Alchemist of The Mysterious Dream PS4 Review – Improving More of The Same

The game opens up with Sophie and Plachta making the decision to go on a journey to become better alchemists. Shortly after they depart, they come across a mysterious old, gangly tree, which soon opens up a portal and sucks them in.

On the other side, Sophie finds herself in an unknown-to-her place called Erde Widege, where she meets another person named Plachta who looks exactly like her companion. Now, Sophie must find out what happened to Plachta and why a lookalike happened to find her.

The plot ultimately revolves around this random happening because Sophie ends up traveling back in time to the town that existed here before Kirchen Bell. Most of the people you meet are brand new, but a few of them come from old stories told in the previous game. This works well for both new players and fans of the first Sophie game because the callbacks are generally subtle. 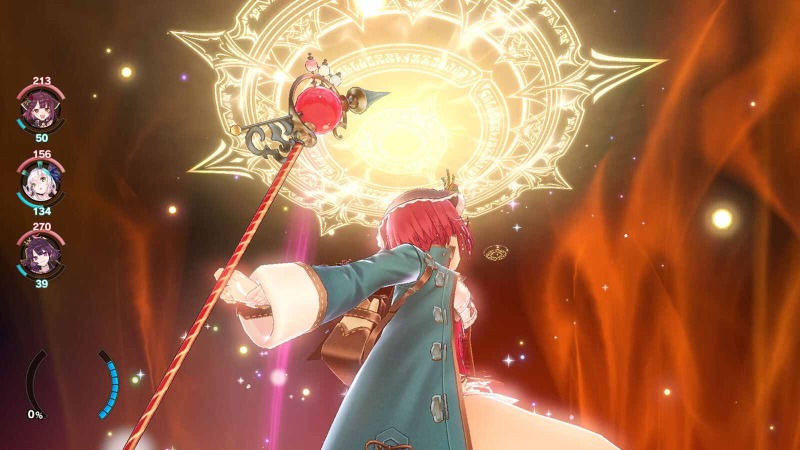 One aspect of this time travel plot that doesn’t sit well with me is how Sophie reacts to meeting someone from her past who’s very dear to Sophie. Instead of elation or suppressing her excitement, she acts like they’re any other individual.

She does question it a little early on, but she shows little emotion to even the potential of it. Sophie is an emphatic character in general, making her lack of significant response feel like a lazy attention to detail for the main character.

In general, the combat in Atelier Sophie 2 does its job well enough. While turn-based, it allows you to apply a quick pace to it by providing a double speed option. Most of the time, enemies don’t require many tactical thoughts, leaving you spamming X over and over while your characters smack whatever enemy stands in your way.

Boss fights require a little more attention but not so much that you need to do more than defend and counter the opponent’s element. Higher difficulties ask for more involvement across the board, but they also force you to grind for levels before you progress anyway. 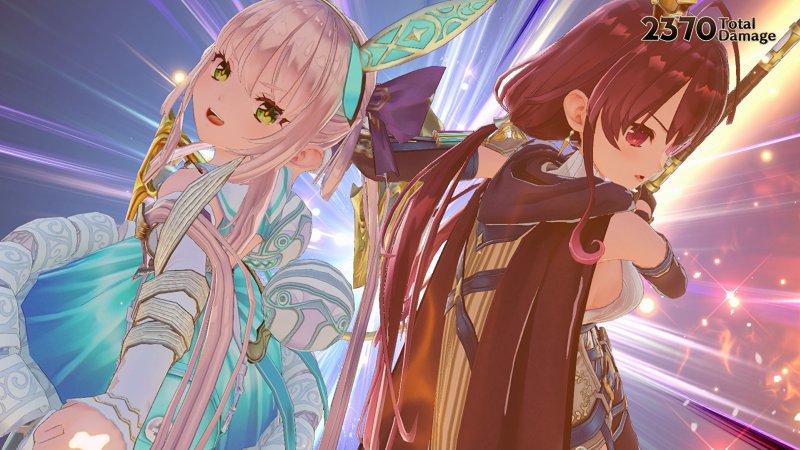 The coolest part about combat comes with swapping out combatants. Combat uses only three members. As you gain more party members, you get the option to swap them out. The best part is that you can swap specific characters when that character is being attacked.

With a button press, a new party member pops in already in a guard position, taking less damage without costing a turn. This along with the double speed option hastens combat further while still giving you control over what you do.

The big sell to all of the Atelier games comes with its alchemy systems. Each named title features its own style of alchemy, and Sophie uses something of a Tetris grid for her crafting.

Each recipe component you pick up has an accompanying gridwork that you place on the grid in tandem with other components. The trick is to match elements from components into the elements shown on the grid. Combine that with filling up the grid, and you boost your end product greatly. 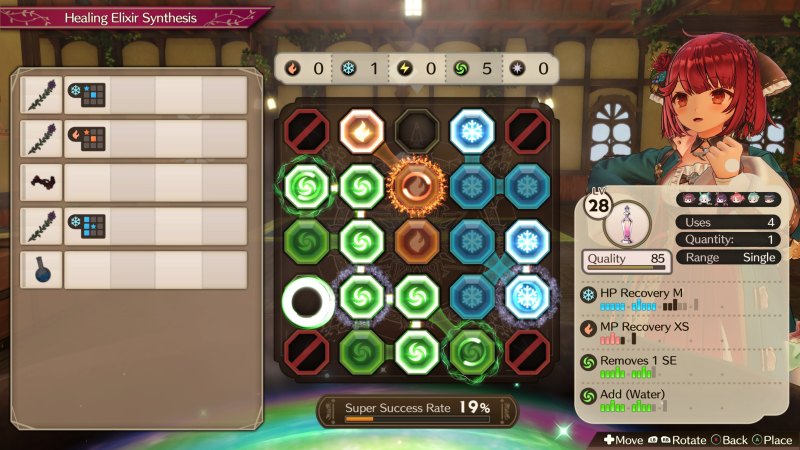 My issue with Sophie’s alchemy system is how much it asks of you and how little it engages you. The Tetris component is fun for a while, of course. However, the sheer level of repetition needed to progress the game turns the fun into a steady chore with little reward.

In contrast, the Atelier Ryza games include an auto-craft option, but Sophie’s don’t. This option would alleviate a great deal of the monotony that comes from repetition.

One other difference between Ryza and Sophie comes from how you learn recipes. In Ryza, you learn recipes randomly from quests and recipe items, but you also learn them from messing around while you craft other items. Couple that with an auto-craft option, and you get a recipe for success (sorry for the pun).

To compare, Sophie learns recipes by finding new ingredients. This helps to make exploration addicting early on, which is a side of these games I usually get run down by. Also so, the amount of unique ingredients quickly thins out, making exploration a bigger and bigger part of your routine.

Exploration is made a little more interesting with the ability to swap between rainy and sunny weather whenever you want. At the same time, it just means that you have two ways to explore the same areas over and over.

The true downside to this is that the plot requires you to learn new recipes in order to progress. This slows progress unnaturally the further you go in the game. Atelier Sophie suffers from this aspect the most. 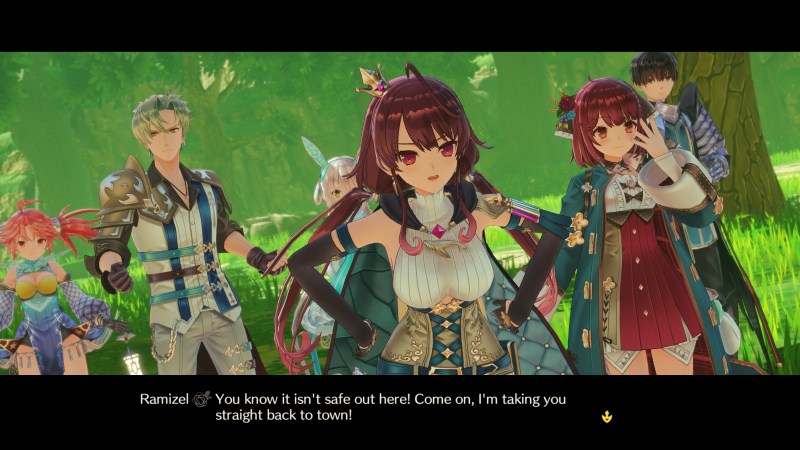 Outside of this, the game literally points you in every direction you need to go to continue with the story up until these roadblocks. I found myself going along for the ride, picking up stuff as I went, only to find myself in a position where the game suddenly asked me to think for myself. That sounds like such a dumb statement to say, but games push to keep our attention span in different ways.

Telling me where to go keeps me from focusing on the product, which is a creative choice. Dropping complete decision making in my lap is another choice. Doing both in the same product so haphazardly contradicts the product and the player equally.

In the game’s defense, if you find the ingredients you need along the way, the game keeps going smoothly. For such a propelled experience, it leaves a lot of room for road blocks.

Make Changes To Stay The Same

All in all, fans of the Atelier franchise know what they’re getting when a new title comes out: a heavy mix of gathering, crafting, and over-the-top anime-like characters. Each title comes with its own problems, and Atelier Sophie 2 is no exception. It propels the narrative forward through several creative choices but leaves too much room for roadblocks to feel like cohesive execution. It also leans more into gathering and exploring instead of crafting.

Atelier Sophie is a few choices away from an RPG I recommend to everyone, but that does leave the door open for those curious people looking for their first Atelier franchise entry to try out.

Atelier Sophie 2: The Alchemist of The Mysterious Dream is out on February 25, 2022.