The Lenovo Legion Tower 5i gaming desktop packs a lot of power and punch for a sub $1000 machine. It’s spec’d out almost perfectly for most gamers and power-users alike. It’s beautiful inside and out with its clear siding, personalized lighting, whisper-quiet design, and near-clean install of Windows 11. Spend a few minutes and dollars in upgrading its RAM and you could have a PC powerhouse.

Lenovo’s Legion Tower 5i Gaming Desktop is a $999 Windows 11 machine that offers a ton of bang and beauty for your buck. This model features an Nvidia GeForce GTX Super graphics card and the latest 11th generation Core i5 6-core processor. While it’s capable of 4K gaming, it’s a great machine for just about any non-professional use-case. Lenovo’s Legion Tower 5i is a desktop tower computer, but it might be the coolest you’ve ever seen with its incredible customizable lighting and glass see-through siding. There are a few features in particular that sold us on buying a pre-built machine as opposed to building our own.

The stock photos of the Legion Tower don’t do it justice. The online photos make it look like a black box, but in person it’s a spectacle — especially when you get the LEDs just the way you like them. The left side panel is a solid glass view of the PC components in all their glory. The wiring and LEDs are very well executed — the internals are a sight to see if you’re even mildly techie. The multiple LEDs are insanely customizable. There are two LED fans on the front, one on the inside/back, internal ambient lighting, and a light-up front logo. You can configure these to your heart’s desire. The LED lights can cycle through millions of colors and can even be used to reflect the CPU temperature. It’s incredible and one of our favorite features.

The tower is bigger than you may expect in 2022. It’s a standard “Mid” sized tower, but if you haven’t seen a gaming PC in a while then it may remind you of PCs in the 2000s. It’s not sleek, slender, or mini. Thankfully, it looks nice because it’s not easy to hide in a tight space. Our only gripe with the case is that it has no handle or easy way to move. Chances are you won’t be doing this so often.

Out of the box, we were expecting to see more ports, though there’s not much missing. On the back are 4 standard-size USB ports (two are USB 3.2), and two more USB 3.2 ports on the front. That’s 6 standard-size USB ports in total, but a couple more on the back could be nice for us peripheral folk. There’s one USB-C 3.2 port on the back, but there’s no USB-C on the front! Then there’s ethernet, audio/microphone ports, and power. Depending on the video card you’ll get a few video-out ports. Our Nvidia 1660 Super comes with a DVI port, a DisplayPort 1.4, and an HDMI 2.0b port. There are extra PCI slots, so you can surely add more ports on the back if this doesn’t cover you. With wireless Bluetooth 5 and WiFi 6 you may not even need anything plugged in other than power and video.

It’s worth noting there’s no disk drive included or a bay for one. You’d have to buy an external one which can be found for under $25.

Aside from the Legion Tower, Lenovo packaged a full-sized wired keyboard, a wired mouse, and a power cable. There’s no video cable included like an HDMI or DisplayPort. This isn’t a surprise, but a bit of a letdown. We’re impressed with the low-profile keyboard. It has good heft, is nice to use, and feels premium. The keys have about twice as much travel as a laptop keyboard, so it’s an easy transition. The mouse, on the other hand, is light and feels cheap — it’s definitely worth upgrading.

This model of Legion Tower 5i (90RS0016US) sells for $999 and is easily worth that in just components. Graphics cards are a real wild-card these days when it comes to pricing. The chip shortage and other factors have also brought PC component prices up.

*note these aren’t replacement or resale prices, but the price of a comparable alternative

Just these components alone price out at roughly $970, and it doesn’t even include the case, fans, lighting, wireless chip, cable management, heatsink, peripherals, or Windows 11. It would easily exceed $1000 to build a comparable machine on your own. The biggest cost is the graphics card and that’s unknown as far as future pricing and availability.

The specs on this machine are respectable and very mid-range by 2022 standards, in a good way. While none of the key components here are top-of-the-line, it’s an excellent machine that can be upgraded for years to come. 8GB of RAM is the notable weakest point, but this can be doubled for $40 with just a few minutes of work. There are 4 slots for DDR4 RAM and it supports up to 128GB, so there’s room to turn this machine into a power-house.

Lenovo packaged Legion with two storage drives: the fast/small SSD and the slow/big HDD. This is common, but is a trend that we’d like stopped. Rather than a 256GB SSD and 1TB HDD, Lenovo should just package a 1TB SSD. They only cost about $100 and it’s way more convenient to the user who doesn’t need to think about which drive to store stuff. The SSD is a PCIe NVMe chip, and very easy to upgrade. The motherboard even comes with an extra slot so you can easily add another SSD. The HDD is 7200rpm 3.5” and Lenovo made just as easy to add a second or replace this.

The power supply is only 400 watts, which is not a ton of power. It’s plenty of power for this machine, but it limits you from future power-hungry upgrades such as a new GPU.

The setup was a piece of cake and Lenovo pre-packaged the PC with Windows 11 Home. The setup was just the standard Windows setup and there was about 5 minutes of setup followed by 20 minutes of installation/updating. Shoutout to Lenovo for packaging such a clean and usable version of Windows! This was the biggest surprise. There’s next to no bloatware. The computer turns on to a beautiful Legion wallpaper with just one desktop icon and only a few processes running in the system tray. The only piece of software that felt bloaty was a McAfee antivirus trial, which we promptly uninstalled. Aside from that, all the software included seemed very native and/or convenient (like Spotify). The Lenovo Vantage software is how we control the internal lighting. It also offers a nice dashboard and configurations for gaming settings and resource utilization.

Windows 11 comes preloaded with the Xbox app which makes gaming setup a piece of cake. Xbox has a marketplace with free and paid games, or offers a subscription. Downloading and installing a game is as easy as the App Store on your phone. I was able to download the brand new Halo Infinite multiplayer for free and it was downloaded, installed, and ready to go in about 10 minutes with a click of a button. I downloaded a few free games and it was just as simple. Of course, there are many great options for gaming on PC, like Steam, but we really appreciated how seamless it was to start playing a game after unboxing. After plugging in our old USB Xbox 360 controller we couldn’t believe how quickly Windows started to take the form of a console.

1080p gaming and 1440p gaming works without a hitch. 4k gaming was a little more hit-or-miss and may take some finagling with settings to get right.

1080p gaming and 1440p gaming works without a hitch. 4k gaming was a little more hit-or-miss and may take some finagling with settings to get right. You may experience some dropped frames, jittering, or lag. We were able to play the new Halo Infinite in 4K on our 77” TV, but had a better experience sticking with 1440p. This 1660 Super GPU and 8GB RAM should play nice with most of the popular games, especially in 1080P.

While gaming in 4K is game-dependent, you can absolutely use your computer in 4K. YouTube, videos, browsing, working, and any other computer-use looks pristine and works flawlessly. Windows 11 easily scales your content so that text isn’t miniature. You can even enable HDR, and you can use two monitors in 4K with this GPU. 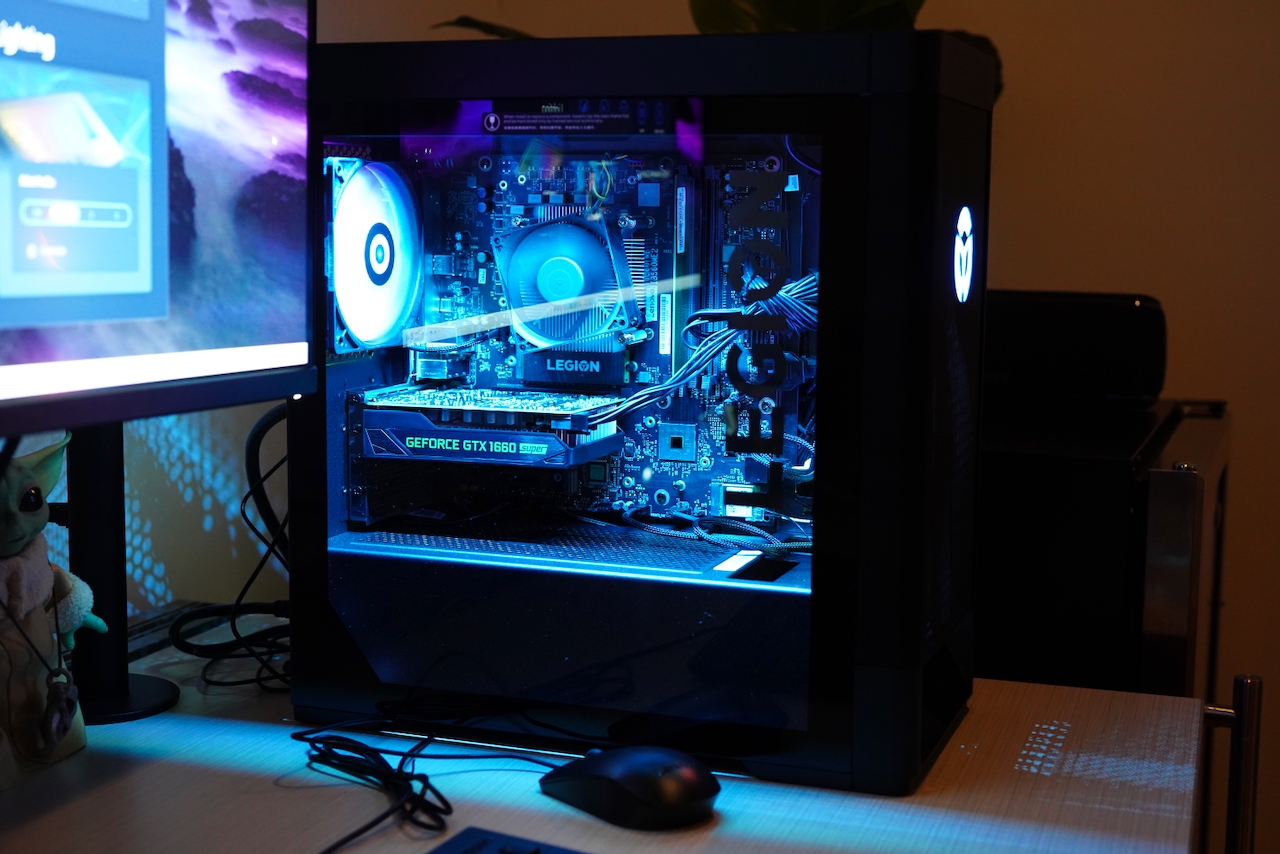