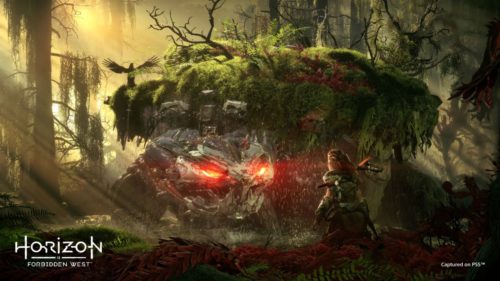 Welcome back to the futuristic wildlands of Horizon, last seen in 2017’s Zero Dawn. Not much has changed since your last visit, but in Horizon Forbidden West, there might be a few things that aren’t quite what you remember. Still, don’t worry – the half-robot, half-Braveheart wheel hasn’t been reinvented, and you and Aloy the red-haired archer/savior of the future earth will be back to your old tricks in no time.

In the ever-crowded space of open world action games where you scour a crowded map, clearing icons and climbing towers to unlock more areas on the map and more icons to clear, Horizon Zero Dawn stood out. Its setting felt like a unique spin on so many science fiction and video game tropes, and unraveling the mystery of who so thoroughly upset the world made for a riveting experience. Still, Zero Dawn wasn’t perfect, with combat you could brute force your way through and some thorny ideas around “savages” and indigenous cultures that the game never really interrogates. Five years later, Aloy’s back with a new adventure, and it’s mostly a journey worth taking.

This time, a mysterious signal from space has put the life-saving AI that’s sustaining the world on the fritz, meaning crops and animals are starting to die out. Aloy must journey to new areas of her world (three guesses which cardinal direction she’s heading), and meet new allies and enemies as she learns the particulars of the people who doomed the world a thousand years ago, and the ways that people have been misinterpreting the evils of their ancestors. It’s not as consistently surprising and immediately original as the first game, but how could it be? Zero Dawn did an admirable job tying up all of its most interesting narrative loose ends. This sequel can only try to take some tenuous open questions from the first game and balloon them out into enough of a mystery to get Aloy on the road.

Guerilla clearly adopted an ‘if it ain’t broke, don’t fix it’ philosophy in their sequel to their 2017 smash hit. You still control Aloy in a future version of the world which has been culturally set back to warring tribes of pre-modern humans, smashed up against hyper advanced machines that humanity barely understands and struggles to survive against.

As you battle these mechanical beasts, you can break off specific pieces to hinder their abilities and scavenger parts to use in crafting new weapons, armor, and equipment. Forbidden West does make combat more challenging, and while it isn’t suddenly far-future Dark Souls, you will have to be more careful and methodical in hitting enemy robots in specific weak points and utilizing elemental weaknesses or environmental traps. You can no longer just swing wildly like a 1000-year old Babe Ruth like you could in the first game.

As you hunt down these robots, you’ll swim, run, ride, and climb your way through some truly breathtaking vistas. Vast deserts, wave-dappled beaches, and awe-inspiring redwood forests all leap to life, and every machine you encounter is full of minute detail that would make an engineer or a gunpla aficionado beam with their pristine intricate fussiness. From the wind through the grass to the small gears constantly whirring in the side of an idle robot triceratops, Forbidden West is objectively beautiful in nearly every moment – ​​perhaps, too beautiful. Forbidden West is a heck of a strain on your hardware if you, like me, are still working with a PlayStation 4. I was plagued by constant pop-in of textures, especially in pre-rendered cutscenes, where every new shot first appeared like everyone was slathered in Vaseline for a few seconds. A recent patch has mostly alleviated this problem, but on PS4 this is still clearly ten pounds of game in a five pound bag.

As you’re navigating these lovely landscapes, you’ll do more than your fair share of climbing. In the first game, climbable aspects of the landscape were always clearly delineated in yellow – abandoned guardrails and handholds always exactly where you needed them. While there’s still plenty of helpful yellow scenery scattered here and there, Forbidden West tries to make its vast world a bit easier to negotiate by freeing up what can and can’t be climbed. By pressing R3, Aloy sends out an exploratory pulse that shows what nearby can be picked up, and what in the area can be climbed on. The problem is, without hammering R3 in front of every wall, cliff, tree, and crumbling building in the game, climbing is a gamble. You’ll sometimes be able to Skyrim scramble your way up surfaces that aren’t technically meant to be climbed, and jumping while climbing is imprecise.

You’ll spend an awful lot of time hammering the Focus button while looting anyway, as you have to manually scavenge each individual machine carcass after every fight. In a way, this feels intentional in how it forces you to mindfully catch your breath after a big fight (and fights can ratchet up quickly when shooting up one herd of machines can attract the attention of a second you didn’t know were nearby) . Don’t gloss over the details of your salvage; consider each chunk of wires and each machine heart and think of what’s the best for it all. There’s also the less charitable way to take it, the one I felt a lot: boy, looting all of these machines and having to confirm on a secondary screen every time I want to pick something up sure does take a long time and interrupt the flow of the game.

Speaking of interrupting things, Aloy has a lot more to say this time around. Any time you get mildly stuck on an environmental puzzle, Aloy will remind you that you need to solve it. Every time you fill your pockets up, Aloy will tell you so. In the time since the first game, Aloy must have spent a lot of time alone and started talking to herself, which would be fine if only she trusted herself (or rather, me, the player) to know what she’s doing.

When the game is actually flowing, it’s a perfectly capable open world action game. Again, it doesn’t drastically re-envision the formula, but it does what you want it to do well. Side quests are upfront about whether they’re narratively dense character explorations, standard hunts to grind up resources, or simple fetch quests, so you always know what you’re setting out to do.

Across the enormous map of territory you can explore, there are the usual open world side attractions: environmental puzzles to navigate, enemy camps to clear out, random collectables to obsess over. There’s even a complex chess-like minigame called Machine Strike, which everyone is obsessed with. While I personally don’t go for in-game games like Gwent, Strike is easy enough to learn and complex enough to master that it will clearly ensnare a lot of hours for a lot of players.

Story missions all feel consequential and move the story forward. One major improvement Forbidden West makes over Zero Dawn is the structure of missions: whereas many climactic moments in Zero Dawn involved wading through more and more hordes of the same enemies you could stumble upon in the world, Forbidden West has better curated combat encounters actual bosses and memorable action set-pieces. The final boss is an actual final boss this time, and not just a pile of the same old enemies. It sounds like small praise, but the way Forbidden West ratchets up the stakes and tension and reflects these escalations in fights you care about winning, with enemies you care about spearing the crap out of, makes the story feel more personally motivated, even if it has fewer massive reveals and twists than the first game.

At the core of its narrative, Horizon Forbidden West is concerned with how the past and future interact. Who has the right to the future? What do we owe the people that raised us? What are the perils of picking and choosing what aspects of the past we revere, and what is the peril of worshiping our predecessors without any scrutiny? While there are some fascinating wrinkles in this core question, they aren’t all equally compelling. Many of the new factions found in this Forbidden West feel extremely one-note, like the war-obsessed Tenakth and the granola-given-human form Utaru tribes. The Western areas of the game’s title, which become un-Forbidden within a few hours, feel like they lose some of their mystery too quickly. A better title might have been Forbidden Past – too quickly the land just becomes a cluster of icons on the overworld map.

As I watched the credits roll, I sat back and reflected on how much fun the final stretch was, and just how familiar the whole endeavor was. Not just familiar because I’d played Zero Dawn, but because of the countless other tower-climbing, base-clearing, tchotchke-hunting open worlds I’ve turned inside-out. Horizon Forbidden West is content to be an extension of the first game rather than a standalone installment. Fans of the first game and fans of this genre will likely find that Forbidden West is playing all of the hits. Still, there’s a sense that some more ambition could have made this into an all-time sequel instead of just a very solid follow-up.

If you’re a fan of open world action games, you’ll quickly find yourself falling into the same patterns and the same activities. Maybe that’s what you want. A 40+ hour expansion to Horizon Zero Dawn is a heck of a deal, and the charm of the world helps spice up the usual loops. But there’s a difference between ‘new’ and ‘different.’ If there’s a third installment in the Horizon franchise, let’s hope that Aloy can make it to some truly new, unbroken ground.

A PS4 key was provided by PR for the purposes of this review.

Some of the coverage you find on Cultured Vultures contains affiliate links, which provide us with small commissions based on purchases made from visiting our site. We cover gaming news, movie reviews, wrestling and much more. 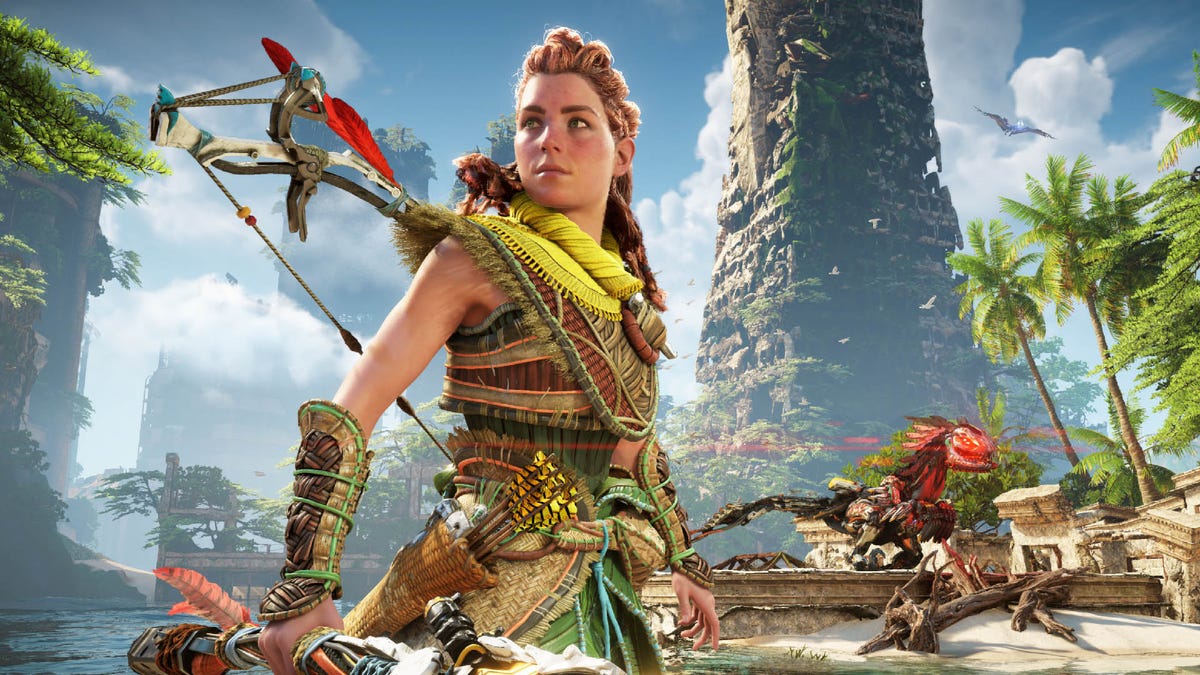 While it doesn’t reinvent the open world or stray too far from its predecessor, Horizon Forbidden West is a worthwhile endeavor for those in the mood for more open world adventures, with surprising nuance and complexity for those who make the trip.