The stock has underperformed over the last year, down 16.3%. But investors should consider buying shares during this lull. The growth of Grand Theft Auto V is propping up Take-Two’s business until reinforcements arrive, including the eventual release of the next installment in the series, which was recently confirmed by Take-Two’s Rockstar Games studio. 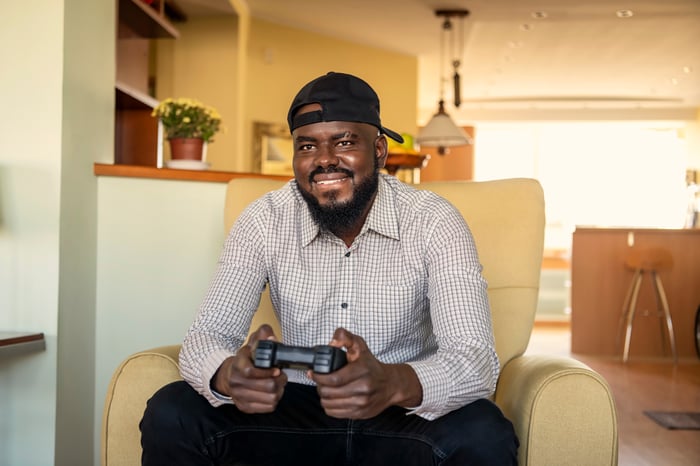 The growth of Grand Theft Auto

Grand Theft Auto V has now crossed 160 million sold copies since launching in 2013. The game offers a single-player story mode, but it has become mostly popular with fans for the multiplayer feature Grand Theft Auto Online.

A steady flow of free updates to the online version throughout the year — including special seasonal-themed events around Halloween, new in-game vehicles, new clothing options for in-game characters, and new story missions to complete with other players — has kept the game fresh for eight years, and it continues to reach new players.

The outperformance of this game is helping Take-Two weather a light period of new releases. While the updates to Grand Theft Auto Online are free, players can purchase virtual currency that allows them to unlock new items while playing the game.

Rockstar Games, the studio behind Grand Theft Auto V and Red Dead Redemption 2, is expected to account for 40% of Take-Two’s total bookings in fiscal 2022, which ends in March. It sets the stage for upcoming releases to drive even more sales of the game.

These upcoming releases are the tip of the iceberg. Rockstar Games recently confirmed that the next installment of Grand Theft Auto is currently in development. It’s not releasing it anytime soon, but that inevitable appearance might set all-time sales records in the industry, given the growing installed base of the current version.

Besides Grand Theft AutoTake-Two’s 2K studio will release Marvel’s Midnight Suns this fall, which management anticipates will appeal to a broad audience, given the popularity of the Marvel Comics Universe and the game’s immersive gameplay.

These are just a few of Take-Two’s previously announced 62 new releases coming over the next few years.

Note: Release estimates are as of May 18, 2021. The times are a snapshot of the current development pipeline and some titles might not be developed to completion, some might be delayed, and new titles might be added. Source: Take-Two Interactive fiscal Q3 2022 investor presentation on Feb. 7.

What is the stock’s upside?

Wall Street analysts currently expect Take-Two to report 20% growth in bookings in fiscal 2023, while adjusted earnings per share are expected to reach $6.30, up from $4.95 expected for fiscal 2022.

Looking further out, Take-Two has guided for compound annual growth in bookings of 14% through fiscal 2024, which includes the pending acquisition of Zynga. That would put Take-Two’s annual bookings at $8.5 billion in two years, compared to the combined $6.1 billion that the combined business would have generated for the 12-month period through September.

Applying a price-to-sales multiple of 5, which is a discount to the average video game stock, would put Take-Two’s market cap (total outstanding shares multiplied by the stock price) at $42 billion in two years. That compares to its current market cap of $19 billion, so investors are potentially looking at a double on their investment from current levels. 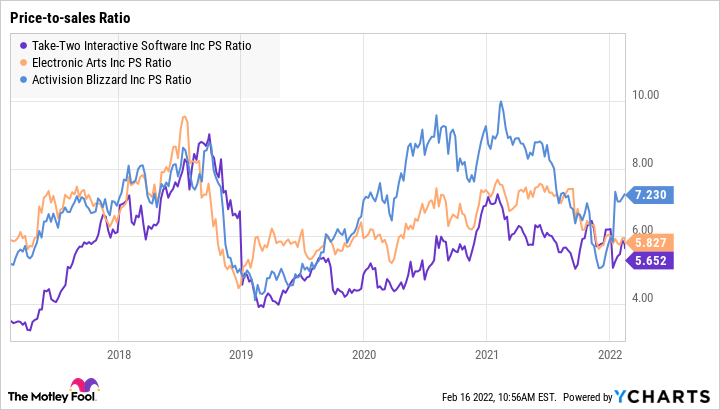 New releases are the next growth catalyst for Take-Two. There is always risk with a hit-driven business, but keep in mind that many of Take-Two’s planned releases are for existing franchises that already have an established fan base, which lowers the risk of sales misses.

Taken together, the data suggests it’s time to start building a position in the stock before the company taps its deep slate of pending releases.

This article represents the opinion of the writer, who may disagree with the “official” recommendation position of a Motley Fool premium advisory service. We’re motley! Questioning an investing thesis — even one of our own — helps us all think critically about investing and make decisions that help us become smarter, happier, and richer.