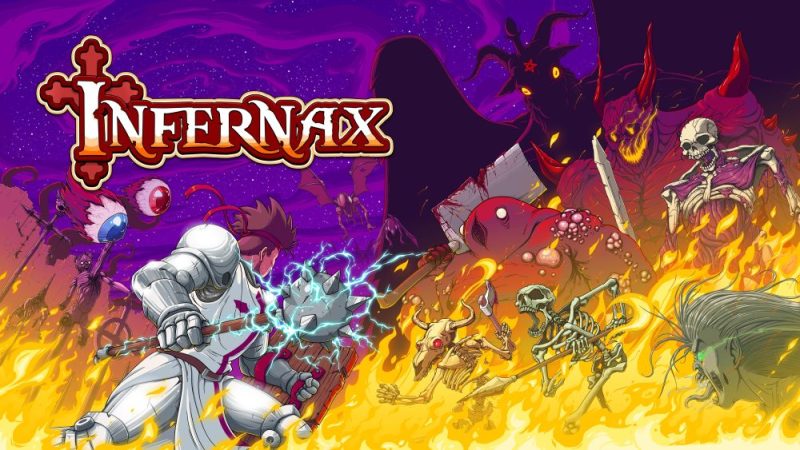 Infernax Review (PS4) – Infernax? What an interesting name for a videogame. It sounds like a Doctor Who baddy or some sort of cream for a weird garlic.

Infernax is a breath of fresh air from developer Bezerk Studio, which is an aptly named studio if I do say so myself. Published by The Arcade Crew, and from the moment I first saw it I knew it was something I had to try.

Just look at it! It makes me all warm and fuzzy.

So, what is Infernax? Well, Infernax is a retro-looking, retro-feeling platformer like metroidvania that has story decisions and gruesome pixel-art. You, a great knight, return to your homeland to find it infected with evil magic and overrun with terrors.

You guessed it, it is your job to sort all this nonsense out. Isn’t it always?

Infernax (PS4) – Blood Will Be Spoiled

Infernax reminds me of games of old. Its no-nonsense, no-frills gameplay is a breath of fresh air, even if early on it feels a bit challenging.

Death was frequent early on and found the game a bit harsh, however, after a few upgrades and purchases from the games many NPC’s it became a lot easier going.

I did like that there was no hand-holding and the game did have a nice difficulty curve to overcome. I do feel too many games these days have little to no challenge. 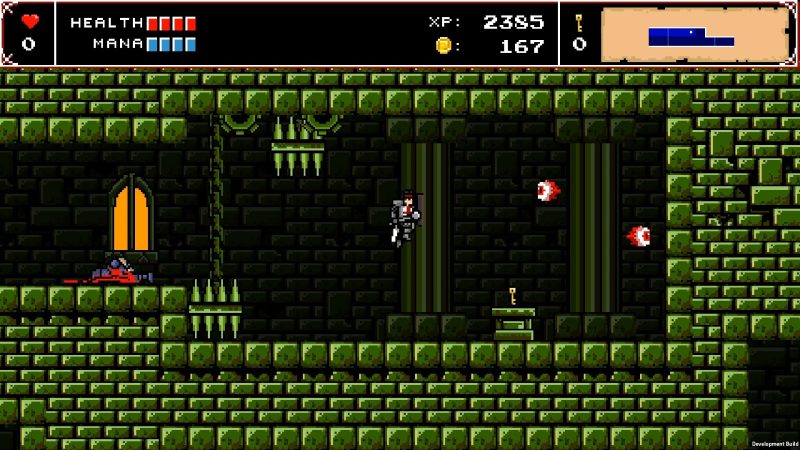 That does not mean that Infernax should be neglected if you want something a bit more welcoming. There are many things you can do to tailor the game to your liking.

Included are various difficulty options, cheat codes and even different ways to handle your inevitable death.

There are many options to make Infernax as easy or as difficult as you like and with all the talk of difficulty options floating around at the minute, I think this plethora of options can only be a good thing.

So what are we doing then? Well, Infernax has you destroying five orbs in order to open a big ominous door. I know, I know, video games, right?

These orbs are spread through a 2D map which can be freely traveled through, well, I say freely, there are some Metroidvania elements literate throughout.

Certain abilities are required to get to certain areas and it gives the game a nice flow and always makes sure you know where to go and it encourages exploration.

Sprinkled throughout Infernax’s world are people with side-quests and quite often you have choices to make.

There is a secret morality meter in Infernax and your choices not only affect interactions with other NPC’s but also garner which of the games multiple endings you get.

I accidentally pressed my magic button and set some villages houses on fire, which did not go down too well. You often get a choice of what to do and that kind of system is not present in games of this ilk, which was an admirable change. 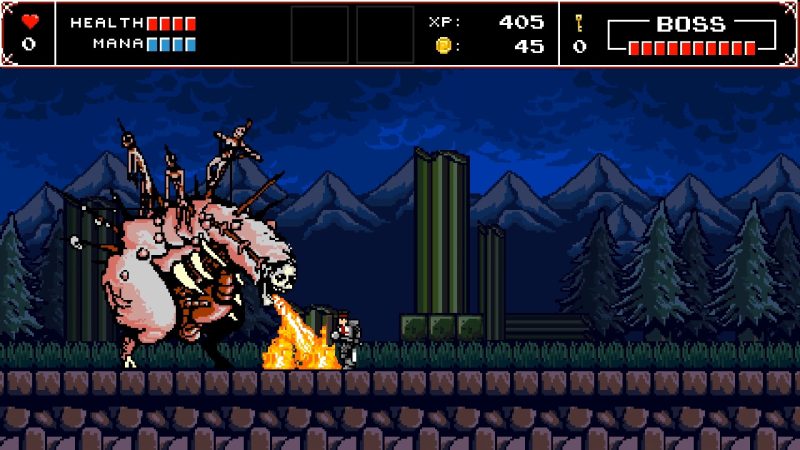 You start the game as a quite wimpy, flimsy knight but over the course of the game, you will get better armour, weapons and upgrades.

Experience is bankable at shrines and spendable on health, mana or power upgrades.

As I said earlier, once I had bought a few lives, had a few potions on hand and upgraded a touch, the game started to flow more fluently and became a lot more enjoyable to boot.

Infernax has a day and night cycle too, which does garner what creatures roam the games any biomes and also has an effect on some quests.

Most of the orbs you will be destroying will be held in castles or dungeons and will require you to do some platforming, combat and slay the inevitable hideous looking boss at the end.

The bosses were all quite fun, require some skill but in the end, normally boiled down to smack the bit that looks like it needs to be smacked tactics.

Combat is quite basic in comparison to most games but that did not bother me. You either smack stuff in the face or block it with your shield.

This simple, boiled down combat did give the game a cat and mouse feeling I appreciated. Block, whack then block again was the dish of the day and creeping slowly through rooms of monsters and traps was slow but entertaining.

You have various spells to unlock and find too which did add a bit of flavor to proceedings.

The classic, sometimes intricate platforming sections may put some people off. There were a few sections that had me wearing at my monitor like a madman. 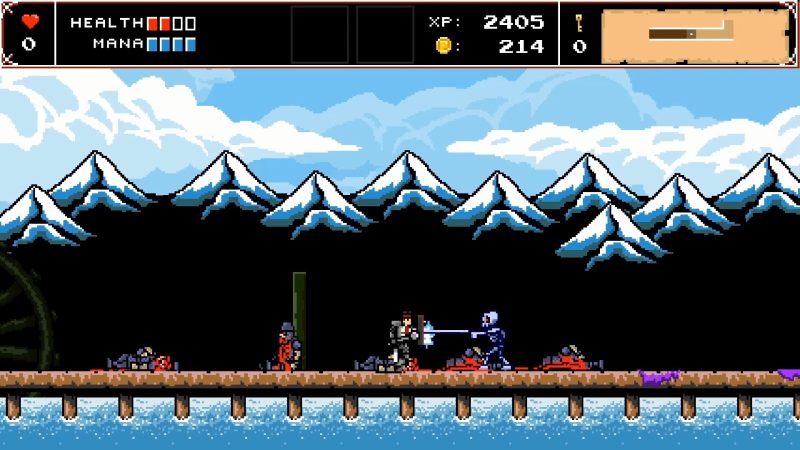 My favorite parts of Infernax, by far, were its presentation and music. The music is chiptune perfection and harkens back to a time of pure joy in gaming for me.

The graphics were simple yet attractive and I loved all the blood and gore that ran throughout. The game starts with a warning and even the games Steam page states – “Pucker up buttercup because it’s about to get gory.” Brilliant.

From smashing ghoul in the face to slaying immense bosses, Infernax drips with blood and every death has a pixelated, slightly humorous conclusion.

Especially the bosses, which always finish with ripping out intestines or smashing the skull of whichever big-bad you have just overcome.

With this in mind though I would be fine with both my boys playing Infernax as the art style is slightly comical, cartoony and not realistic in any way. It’s simplicity is beautiful.

I know, it is not exactly taxing the PlayStation 5 in any way but the testing and QA teams did their job well and I always like to give them a shout-out, especially when I am playing so much stuff these days that feels like it needed more time in this regard. 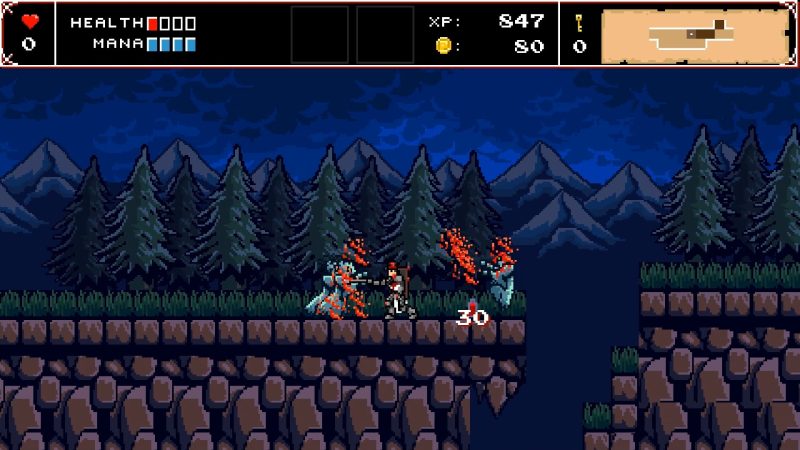 Infernax, while not being anything too novel, is an enjoyable mashup of many genres. It’s a bit Metroidvania, a tad old-school platformer and all mixed in with worthwhile story choices and a nice difficulty curve.

It has a lovely presentation style with comical gore and I certainly enjoyed my time with this quirky little title.

Infernax has great difficulty options, to suit any gamer from old-school gaming grandad to uber-gamer-souls-dude. It is not too long, will take some skill and as long as you are willing to overcome a difficult opening, you are golden.

There are not many games like Infernax on the market and I am certainly glad people are still making things like this. I much prefer it to another cut and paste pew-pew shooter.

Infernax is currently available on PS4, reviewed on PS5 via backwards compatibility.