It’s one thing for games to rope in some nostalgia when it comes to artistic vision, and it’s another when it manages to pull off just that and give an amazing gaming experience, too. There’s never been a drought when it comes to retro, pixel art styled games, but one that offers a deep gameplay experience? Yeah, that’s not as plentiful. Thankfully, that’s what we have with this little gem, as the era of 8-bit gaming lives strong in Infernax, as Berzerk Studios delivers on a nostalgic adventure, filled with blood, guts and glory.

What a Horrible Night to Have a Curse

Infernax follows the tale of a knight returning to their home after a grand adventure. Hoping to be celebrated upon return, the young knight soon discovers that their home has been overrun by abominations, brought forth by unholy magic. With their land in peril, and the population dwindling with each passing day, it’s up to the knight to exorcize these monsters, and once again restore peace and balance.

Despite being presented as a classic hero tale, Infernax is far from that. 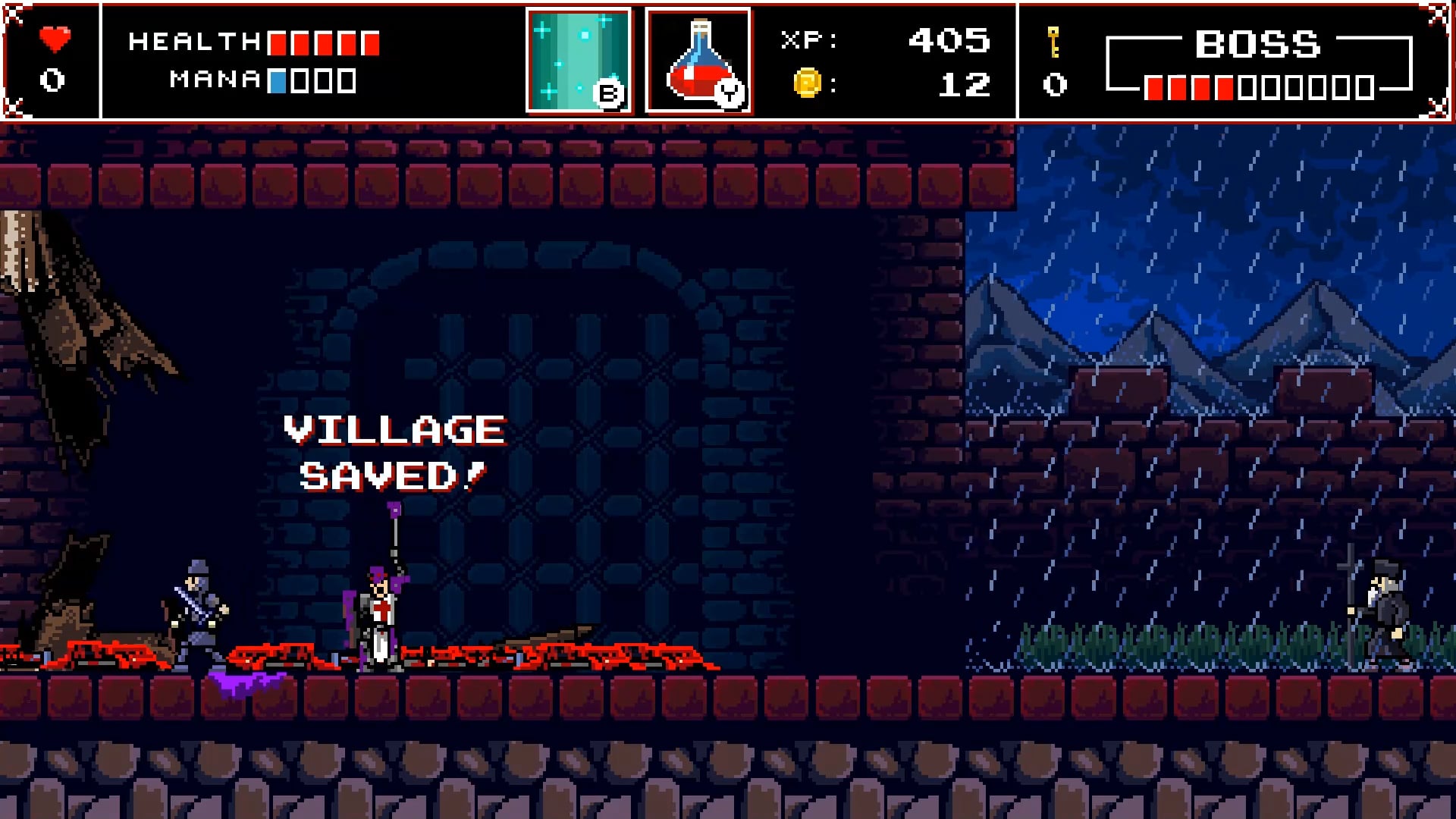 While players can certainly play the role of hero, developer Berzerk Studio have cleverly added their own twist to the 8-bit side-scroller genre, by presenting players with some tough, game altering decisions. In the opening act we are met by a man who is in clear agonizing pain, screaming for the player to end their life. It is here that we are presented with either two options: Slay the man to end his pain, or attempt to save him. Being the good Samaritan that I am, I didn’t want to just end someone’s life without actually knowing why. So, I choose to save them. That was a bad idea, though one that would have unlikely resulted in something different if I choose to kill them.

In that very instance, the man’s body ripped itself apart as grotesque appendixes began sprouting, revealing some hellish monster, straight out of someone’s nightmare. It was one of the most repulsive imagery I’ve seen, a thing that instantly hooked me to the world of Infernax.

Still, this was one decision that I was firmly set on that was going to reach this outcome regardless of the choice. However, with attempting to save the NPC, it did open up an additional side quest later. That’s the general scope of the cause and effect of the choice making in Infernax, as while you may not see the action immediately, down the road it may prove to be drastic. So much so that it can lead to multiple, vastly different endings, providing the players all the reason to replay the campaign again.

In turn, this gives the world of Infernax the kind of life that you would see from a massive open-world. NPCs feel alive as they go on with their lives during the day, with nights changing their behavior as they no longer provide safe havens for the player in fear of their own lives. Some side quests will even introduce new buildings structures, or eliminate them altogether.

The main campaign of Infernax is a simple one if you travel the straight road, but there are plenty of reasons to go off and venture, explore every inch of the gorgeous 8-bit world. Tons of secrets to unveil, and plenty of lore to learn around it.

Looking at Infernax, you’re probably thinking this game looks like any other pixel art style game out there, and it certainly does from first impression. The world of Infernax is styled in a form that is reminiscent of classic Castlevania games and even Zelda. This shouldn’t come much as a surprise, considering that Berzerk Studio has been open about those clear inspirations, and Infernax oozes out of its with it.

However, while the blocky characters and environments are pleasing to the eye, what makes Infernax visuals so damn good is not what’s happening on the outside, but what’s going on inside, literally. In my 20+ years of gaming, I don’t think I’ve played a 8-bit pixart game that is quite as gory as Infernax, which is impressive to say the least. 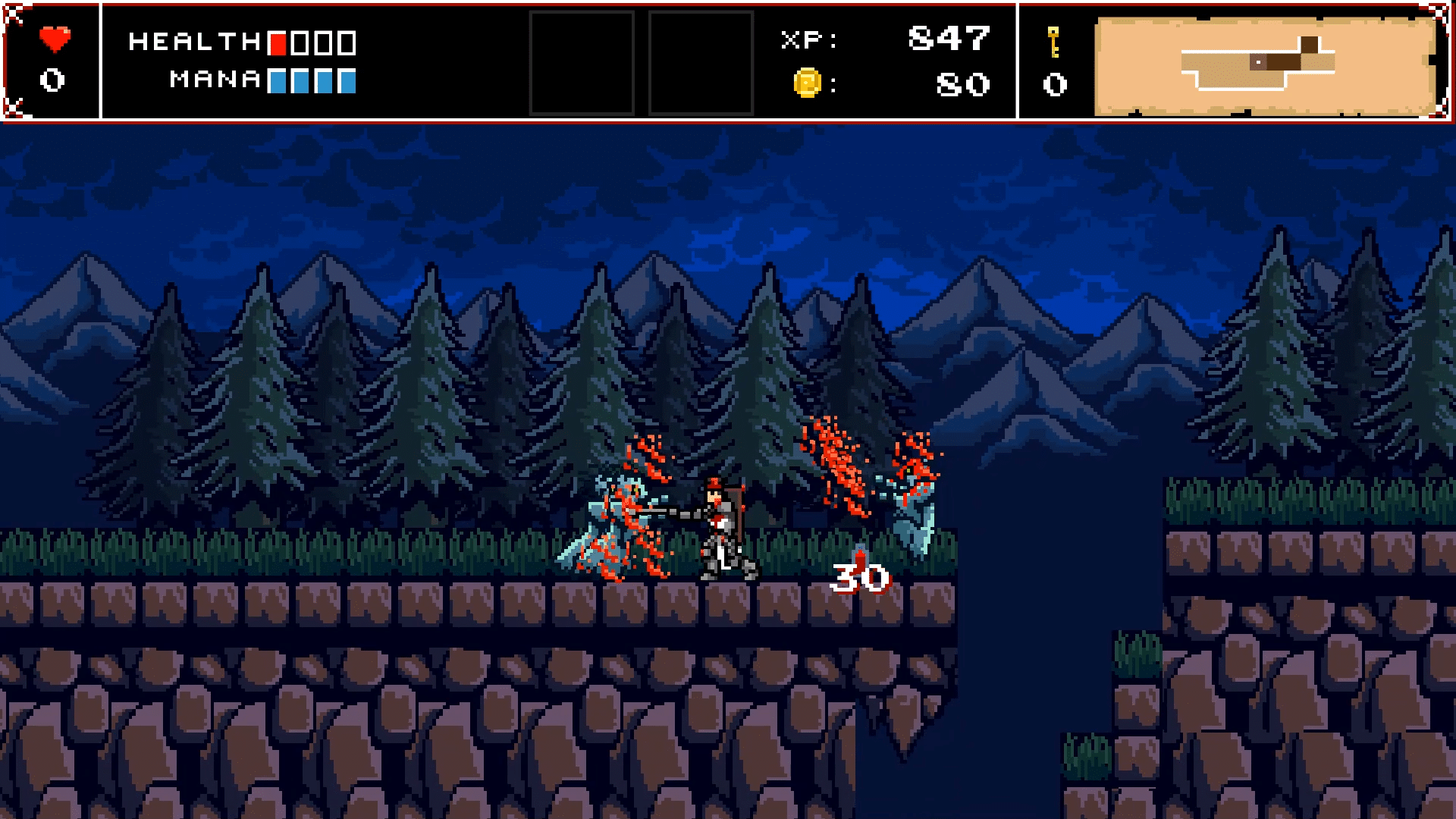 Infernax is insanely gory, to the point that it’s outright terrifying. Seeing blood dripping from the armor of the main character as they bash someone’s head in, or turn them into a pile of musky guts. Or cutting someone in half and having all their tendons pulled apart as the halves split. It’s satisfyingly disgusting to the point that I wanted to kill everything just to see how creative the team made their death animations.

The enemies themselves come in a wide range of variety, as do the environments. It’s surprising how many details can be crammed into something so simple. The first boss you encounter shows this off incredibly, as you can make out all the fine tiny details such as bones sticking out, opening of gashes, organs spewing out, as well as a number of prominent features. It’s repulsive, yet I can’t help but smile at it. The lighting and shadowing details added just highlights the attention to detail the team set out.

There is a lot to love visually about Infernax, as much as there is in it’s immensely fun, yet challenging gameplay.

A Tribute to Retro Gaming

With its retro pixel art visuals, it should come to no surprise that Infernax plays to the tune of classic 2D side scrollers. As such, gamers should go into this game with the assumption that it’s probably going to kick their ass, like a lot.

While the opening introduction paints Infernax as a simple hack-and-slash, it doesn’t take very long afterwards to realize just how difficult, and unforgiving it can be. The screen gets filled with enemies left and right, and with nothing but a shield and sword (or mace?) at hand, you’ll need a lot of concentration if you want to survive long enough to see the kingdom liberated from these demonic fiends .

However, while Infernax builds off of core foundations found in titles such as Castlevania, Zelda, and so many other 90’s classics, it is still a game built with the modern gamer in mind.

Berzerk Studios may be, er, berserk about throwing us into the world of Infernax with little to no chance of survival, but they do so with a small ray of hope. Scattered throughout the world are a number of NPCs, shops, and even save points that can be used to aid you on your journey. Shops for example will have an assortment of potions, with wizards located in different towns that can teach the player all kinds of spells.

Save points are useful, not just in their nature to save current progression, but in that they allow you to “level” up. Enemies grow stronger and stronger, with your attacks being less effective as you progress through the game. This provides a different kind of difficulty as it feels in line with a progress system that’s reminiscent of RPGs. 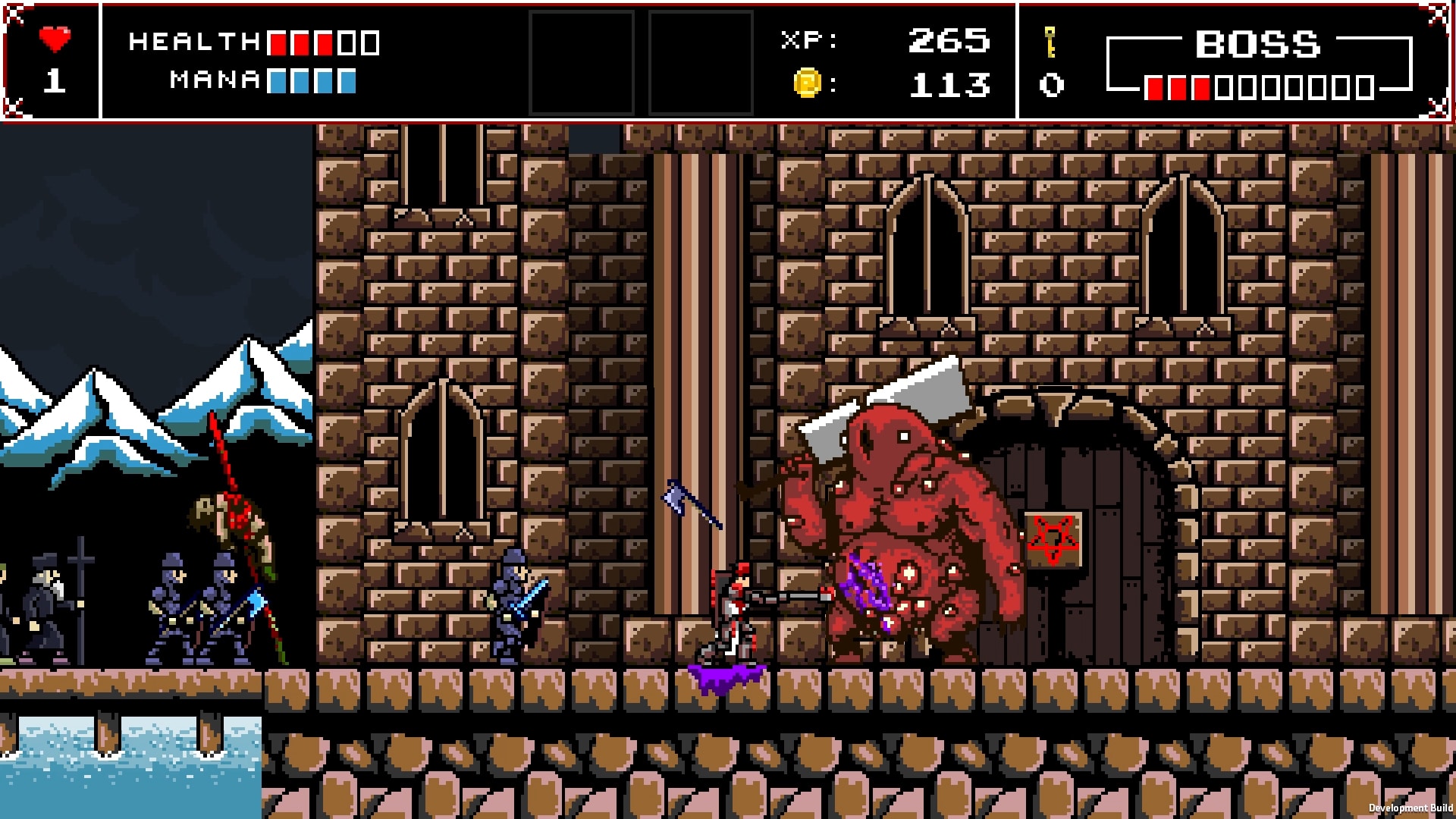 Still, despite all these Infernax mechanics still packed quite a challenge, especially in its latter stages. Everything feels like it’s out to get you, almost as if the slightest mistake could prove to be a fatal blow. There were countless times that I just wanted to throw my controller at the screen, all because I missed a jump, got stabbed, or simply, wasn’t “gud” enough.

If that scares you, then Infernax probably isn’t the game for you, but to me, Infernax is exactly the kind of game that made me fall in love with gaming in the first place. Though I should mention that despite the hard difficulty, Berzerk did leave a number of accessibility options, from lower difficulty, to a cheat system that makes you completely immortal. After all, those 8-bit games of the past had cheats, so why shouldn’t Infernax, right? I toyed around with them after my first completion, and I will say that if you are a player who hates big difficulty spikes, the cheat system definitely has you covered.

Look, all you need to know about Infernax is that it’s a love letter to the 8-bit era of gaming. It’s a game built on the nostalgia that old timers like you and I have been lusting for since the dawn of 3D gaming. It’s fun, challenging, as much as it is beautiful, and repulsive with its gore-fested visuals. It’s a game that’ll put a smile on your face the moment you boot it up, and keep it until the credits roll.

Infernax review code was provided by the publisher. Main version tested was PS4. You can read SP1st and MP1st’s review and scoring policy right here.