TrueTrophies is proud to present The Uncharted Compendium — a history of the series from A to Z, complete with awards, rankings, and your memories. The first chapter is all about Drake’s Fortune, the first of the series and a PS3 game vital to the success of the system.

Before the mysterious tropical islands, snow-laden mountains, arid deserts, and twisting jungles of the Uncharted series, there was “Project Big.” Naughty Dog needed to up the ante after spending the PS3 generation with Jak & Daxter. The team were desperate to move away from cartoony graphics and wanted to test themselves by pushing things in a photorealistic direction. Developing a new IP was paramount for motivation said Evan Wells, the co-president of the PlayStation Studio. So, “Project Big” began with all the most technically astute staff building a foundation from which Naughty Dog could build. It was to be an architectural wonder that would eventually power the PS3 to success with a series that came to define modern PlayStation.
Uncharted: Drake’s Fortune was the first glimpse that the PS3 had of success after its rocky start. “Project Big” was in development for a year before the full team came aboard for a speedy two-year turnaround. The team were targeting “stylized photorealism” with an IP that was all-new. Tapping into around 40% of the power of the PS3’s new CELL processing unit allowed the PS3 to render incredibly complex animations for the time. In so doing, the animation count could drive up player immersion using small unconsciously registered details in higher definition than ever before.

ScottishNub: Uncharted 1 was my favourite, [but] Uncharted 2 is probably the best one.

As for the actual Uncharted portion of the game, Naughty Dog was aiming for another franchise series after the console-defining successes of Crash Bandicoot on the PS1 and Jak & Daxter on the PS2. The team needed something that could help push for that level of realism it wanted, but remain a fun and enticing experience for the gamer. They settled on the pulp action-adventure genre that had famously produced films like Indiana Jones and National Treasure, explained lead gameplay designer Richard Lemarchand to IGN. Lead writer on the initial trilogy Amy Hennig also drew on the wit, resourcefulness, and guile of the typical leading characters of the genre. Nathan Drake was borne of this confluence of influence, but would also be much less ‘perfect’ than the other famous archaeologist and explorer of the video games space, Lara Croft. You can hear Drake panic as he gets shot at, or be surprised when a grenade gets pumped his way by an enemy. It gives him a sense of tangible humanity that hadn’t really been explored before.

That mix of in-game storytelling and narrative design would be a gamechanger for the PS3 generation, especially when layered with attention to music and lighting inspired by the film industry. Lemarchand even stated the combination of gameplay, in-game storytelling, and occasional breaks for cutscenes was the dream composition of a game in that period. In many ways, this was an advancement on what the Tomb Raider series had been doing since 1997, earning Drake’s Fortune the nickname “Dude Raider” before release. With supporting characters like reporter Elena Fisher and Drake’s mentor and adventuring companion Victor “Sully” Sullivan, Naughty Dog built itself a cast to help buoy the adventure with witty banter and colorful relationships. The game would be released in late 2007 to critical acclaim, landing at an 88 on Metacritic. In late 2008, trophy support would be patched into the game.

Lone Guitarist: While Among Thieves is objectively the best game in the series, my favorite memory of the series is actually from Drake’s Fortune and it is when you first see the German U-Boat.

Drake’s Fortune takes us to an island in the middle of the Pacific Ocean in search of El Dorado after Drake and Elena discover a diary in the coffin of famous adventurer Sir Francis Drake. However, Drake’s companion, Sully, is being chased after by mercenary leader Gabriel Roman and lieutenant Navarro for debts unpaid. Drake is captured by pirate Eddie Raja — another former associate — and the tale unfurls. 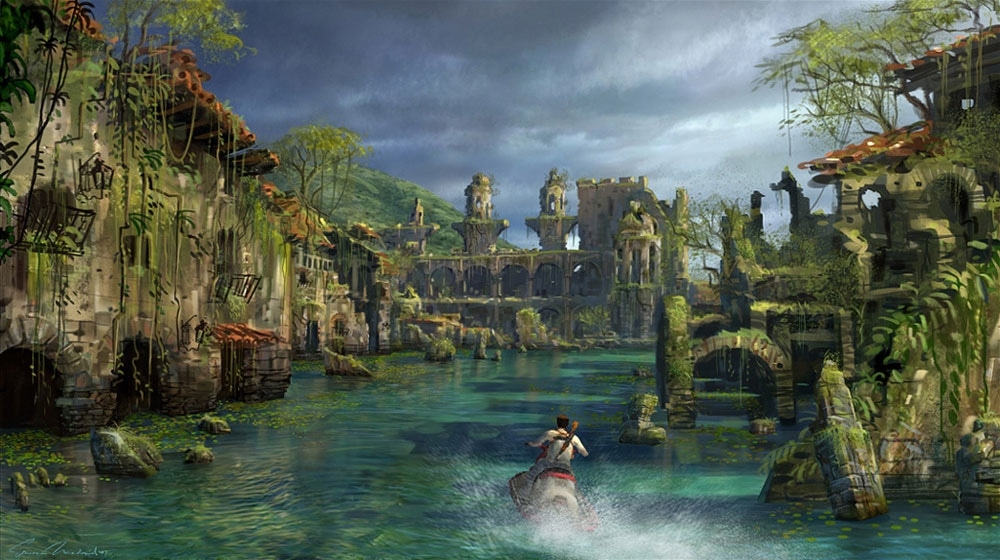 Where the crap did that come from?: The last acts of Drake’s Fortune
There you are, enjoying the realism of just how wet and dirty Nate’s buttocks can get in all this amazing water and forestry, before heading down into the catacombs after your treasure. There, in a vault; Drake, Eddie and Navarro are facing off, when suddenly—boom! Descendents appear over the ridge — white ghouls that are the members of the Spanish Inquisition from 400 years ago transformed by the El Dorado treasure. It is a very campy turn and one that has puzzled many people, especially since the fantasy element disappears entirely later in the series. It is a bit of an archaic genre trope where the rest of the game is much more focused on the realistic.

In retrospect, this is very much a first step in the series even if the critical reception was incredibly positive. In fairness, Drake’s Fortune was a bit of a groundbreaker for PlayStation 3, being the foundation for the 2009 surge in quality exclusive games. That is reflected in our poll asking for your favorite Uncharted entries, with Drake’s Fortune coming in fourth of eight with 8.61% of the votes. That sits it just above Vita’s Golden Abyss and The Lost Legacy, both of which we would recommend over Drake’s Fortune in all honesty. While the story is fun and the exploration aspects are really cool, some of the cinematic gameplay components just aren’t quite up to par with the rest of the series. A great introduction, but there was just so much more to follow.

Thank you for reading. Now, head on over to Chapter 2 — Among Thieves to keep reading about this wonderful game series. In the meantime, let us know what you thought of Uncharted: Drake’s Fortune in the comments!